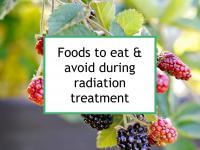 Foods to eat & avoid during radiation treatment
Radiation treatment (radiotherapy) can result in side effects such as fatigue, skin damage, and injury to the heart and lungs. A number of foods or their component molecules have been shown to help obtain relief from these adverse effects without lessening the cytotoxic impact of radiation on breast cancer cells.
The foods listed below are recommended during radiation treatment. The food list, which is updated continually as new research becomes available, has been developed based solely on the results of published academic studies. Clicking on any of the foods will take you to its webpage, which contains specific information concerning that food's relationship to beast cancer (including its overall ranking, for example, highly recommended or recommended in moderation), as well as links to supporting studies. Emphasizing the foods below will help maximize the treatment effects of radiotherapy while increasing well-being and reducing side effects such as fatigue.

Foods that enhance the effectiveness of radiation treatment

The following foods are good sources of compounds that have been shown to increase the anti-cancer effects of radiation treatment and/or protect normal tissues, but not tumors, from radiation:
Tamoxifen has been shown to enhance the effects of radiotherapy in ER+ breast cancer. The antidiabetic drug metformin has also been reported to increase the effectiveness of radiotherapy. Research also suggests that cholesterol-lowering drugs could result in less radiation resistance among hormone receptor positive (ER+/PR+) and inflammatory breast cancer (IBC) patients who undergo radiotherapy. There is also some evidence that limiting calories to some extent could heighten the treatment effects of radiation treatment. Topical application of honey has been shown to be effective in reducing the severity of radiation-induced oral mucositis. Cigarette smoking during radiotherapy can result in increased treatment-related complications.

Supplements for patients being treated with radiotherapy

The following supplements generally have been found to be safe and beneficial for those being treated for breast cancer, including with radiation:
Please consult your oncology team for advice concerning your situation and dosages. It might make sense to be tested for deficiency in vitamin D and plan for follow up to determine if your reading has reached a desirable level.

Foods that should be limited or avoided during radiation treatment

The foods listed below have been found to protect cells against radiation treatment (i.e., they are radioprotective) without having been proven not to interfere with the cytotoxic effects of radiotherapy.
Shellfish, especially raw shellfish, should also be avoided during radiotherapy since they have the potential to cause foodborne illness that could interfere with the timely completion of treatment.

Supplements that should not be used during radiation treatment

While antioxidants consumed in food as part of the diet do not appear to interfere with the effectiveness of radiotherapy (or chemotherapy), the use of antioxidant supplements during such treatment has long been a source of controversy. Radiation oncologists and others have expressed concern that antioxidants are capable of diminishing the effectiveness of radiotherapy by protecting tumor cells from radiation. This is because radiation destroys cancer cells in part by generating high levels of free radicals and antioxidants have the potential to neutralize and nullify this mechanism of action.
On the other hand, it has been argued that antioxidants do not interfere with treatment and may, in fact, increase tumor response. Furthermore, the adverse side effects of radiotherapy can be mitigated with antioxidant and other supplements, thereby enabling patients to endure the treatment. In addition, radiation itself reduces the level of antioxidants such as vitamin A, C, and E in tissues, which may need to be replenished. (However, this leaves the question of dosage for the most part unanswered.)
We do not intend to try to solve this question. However, it is clear that the chemical and other interactions that lead to tumor cell death are complex and this complexity is too profound to be explained in all cases by relatively simple theories or clear-cut narratives. High-quality academic research still reports conflicting conclusions as to whether it is safe to take certain antioxidants and other supplements in combination with radiotherapy. Since research is in disagreement, we lean on the side of caution and recommend against taking the supplements listed below, which have been studied and reported (in some, but not all or even most studies) to reduce the effectiveness of radiotherapy:
We also caution against taking micronutrients such as apigenin, lycopene, or resveratrol that have been reported to be radioprotective and/or to increase radiosensitivity. This is because of the possibility of unintended outcomes. Safe and effective dosages for these supplements during radiation treatment have not been established; it is best to obtain them through diet.
Please also see our article on how to optimize your breast cancer diet for more information on tailoring your diet according to treatment and breast cancer type and subtype.