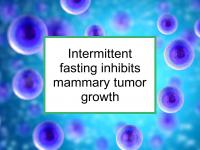 A new study has reported that restricting feeding of obese postmenopausal mice to eight active hours prevented obesity-related mammary tumor growth. This outcome took place without any calorie restriction or weight loss in the mice. Restricted feeding also delayed tumor initiation and reduced metastasis to the lung.
The elevated blood sugar, insulin, insulin-like growth factor 1 (IGF-1) and inflammation levels that can result from eating throughout the day are known risk factors for breast cancer and its recurrence. Long-term calorie restriction has been shown to inhibit mammary tumor development in mice. However, multiple periods of intermittent fasting are even more effective in inhibiting mammary tumors in mice.
Fasting longer at night and reducing evening calorie intake both have been linked to improved glycemic control and reduced inflammation, thereby reducing breast cancer risk. Avoiding night time eating also appears to improve breast cancer-specific survival. One study reported that nightly fasting periods of at least 13 hours was associated with significantly reduced breast cancer mortality.

To conduct the study referenced above, groups of obese and normal weight postmenopausal mice were used to test the impact of time-restricted feeding on various factors associated with tumor development, growth and metastasis.
Mice were placed either on a high-fat diet (60% of calories from fat) or maintained on a control diet, resulting in normal weight. The control mice were used to help isolate the role that obesity played in the experimental results. Mice on the time-restricted feeding schedule were given access to the high-fat diet from 10 pm to 6 am daily (normally an active period for these nocturnal animals).
The authors conducted numerous experiments to establish the impact of time-restricted feeding on tumors and determine the underlying causes of the outcomes. Time-restricted feeding was found to delay tumor initiation, reduce tumor growth and volume, and inhibit lung metastasis in obese mice. In fact, time-restricted feeding completely eliminated the accelerated tumor growth caused by obesity.
These results were accompanied by improvements in metabolic health, including normalization of excess insulin levels. Importantly, the authors demonstrated that this insulin-lowering effect was the mechanism by which time-restricted feeding inhibited tumor growth. The average tumor weight in each mouse was correlated with its fasting insulin level.
Time-restricted feeding also was shown to have similar beneficial effects in a mouse model of triple negative (ER-/PR-/HER2-) breast cancer. Time-restricted feeding caused a five-week delay in tumor initiation, eliminated the accelerated growth caused by obesity, and reduced the size of tumors that did develop.
The authors comment that maintaining the time-restricted eating schedule five days per week is adequate to realize the full benefits of this dietary strategy. Therefore, women who wish to adopt it may be allowed some flexibility on the weekend.