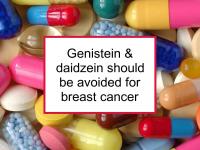 Genistein & daidzein should be avoided for breast cancer
Soybeans are a major dietary source of the isoflavones genistein and daidzein. Both are phytoestrogens, plant molecules that are structurally and functionally similar to mammalian estrogens. Phytoestrogens are thought possibly to inhibit binding of the more potent endogenous estrogens and decrease their potential effects on breast cancer risk by competing for estrogen receptors.
On the other hand, phytoestrogens appear to be capable of promoting estrogen positive breast cancer under some circumstances. Genistein accounts for approximately 50% of total soy isoflavones, whereas daidzein accounts for about 40%. Genistein is also a component of currants, parsley and sage, as well as other legumes such as lima beans and chickpeas. Daidzein is also found in currants and some other legumes such as fava beans. This article covers genistein and daidzein in general. The recommendation above refers to genistein and daidzein supplements, not isoflavones as found in food.
Genistein has been shown to have antiviral and antioxidant properties, and has been shown to ameliorate fatty liver in insulin resistant rats. Like estrogen, soy phytoestrogens are have been shown to have neuroprotective actions, however, unlike estrogen, genistein and daidzein have been shown to be toxic to primary neuronal culture at high concentrations.

The major isoflavones in soybeans are actually genistin and daidzin, the glycoside conjugates of genistein and daidzein. Genistin and daidzin are converted by human gut bacterial flora into genistein and daidzein and other compounds such as O-desmethylangolensin (ODMA), 5-hydroxy-equol (from genistin), and equol (from daidzin). Equol has been shown to have the strongest binding affinities and estrogenic activities (especially for ERβ) among the daidzin metabolites and has been hypothesized to be largely responsible for the estrogen-like activities of soy and its isoflavones. However, there is a great deal of variation among individuals in the metabolism of genistin and daidzin, which appears to be dependent partly on environmental factors, including other components of the diet, and partly on genetic factors.
Only 25% to 35% of the U.S. white population is capable of converting daidzein to equol, whereas people in high soy consumption areas of Asia have rates closer to 40% to 60%. There is some evidence that Hispanic or Latino women are also more likely to be equol producers. Approximately 80% to 90% of people harbor the bacteria required to produce ODMA. The frequency of equol producers in one study of vegetarians was found to be 59%, similar to the reported frequency in Japanese adults consuming soy, and much higher than for nonvegetarian adults (25%).
One Japanese study reported that consumption of dairy products was significantly higher in those who did not excrete equol than in those who did. Seaweed consumption has been found to enhance intestinal production of equol, which could partially explain some of the breast cancer protective effects of Asian diets that are high in both seaweed and soy. Another U.S. study comparing Korean American and non-Hispanic white American women and girls found that the prevalence of equol-producers was higher (51% vs. 36%) and the prevalence of ODMA-producers was lower (84% vs. 92%) in the Korean Americans.
The differences in rates of equol producers partially explains the generally tepid effects found for soy consumption in studies of European and U.S. populations compared to Asian populations. It makes sense that Asian populations, which have had many thousands of years to develop their ability to digest and extract nutrients from soybeans (which are less digestible than most other commonly-consumed foods), would have a slightly different genetic profile than populations that are relatively new to soy consumption.
Several studies have reported that equol has dual action depending on concentration — a tumor growth-promoting effect at low concentrations or an antitumor effect at high concentrations. Note that laboratory animal species used in breast cancer studies tend to produce high levels of equol, which means that animal studies may overestimate the favorable effects of consuming soy or soy isoflavones in women. One 2020 Japanese study also reported that equol might interfere with the treatment effects of tamoxifen, depending on concentration.

Our conclusions about the effects of consuming genistein and daidzein supplements are based on three types of information: (1) studies of the impact of genistein, daidzein or equol on breast cancer cells; (2) studies of the effect of consuming genistein or daidzein or diets rich in these phytoestrogens on breast cancer in animals; and (3) human studies and observations.
Laboratory studies on breast cancer cell lines shed light on the possible mechanism of action of these compounds, but they do not necessarily provide convincing evidence of similar actions in women, especially since the results appear to be contradictory. Soy phytoestrogens have been shown both to inhibit and to promote breast cancer cell growth in the laboratory, depending on the concentrations and numerous other factors (such as whether they are administered in the presence of caffeine, certain carotenoids, or indole-3-carbinol (found in cruciferous vegetables)). The evidence hints that the potential for breast cancer promotion may be greater in later stages of breast cancer.
Animal studies also provide important information because they have been performed in a controlled environment with well defined conditions. However, such studies again cannot reliably model the effects of soy phytoestrogens, especially since the reaction to these compounds differs among women depending on their genetic makeup. Animal studies are inconsistent as to whether consuming whole soy foods or soy isoflavones protects against breast cancer or promotes its growth and proliferation.
They are also inconsistent with respect to the effect of soy isoflavones on the growing reproductive system: physiologically relevant doses of genistein appear to cause changes in the developing female reproductive system that may be damaging to fertility but may also protect against breast cancer.
Finally, human experiments with well-defined soy-related dietary inputs can provide meaningful information on the relationship between soy phytoestrogen consumption and breast cancer risk, but they are subject to multiple confounding factors and genetic differences between women.
Asian studies are more likely than European or U.S. studies to find an association between soy isoflavonoid consumption and reduced breast cancer risk. However, some non-Asian studies have found a slightly increased risk of breast cancer for total phytoestrogen consumption or individual phytoestrogens, including equol.

Isoflavone supplements should be avoided

Based on the available evidence, consuming genistein, daidzein or equol supplements might promote breast cancer growth under some conditions, especially in breast cancer survivors. For example, studies consistently indicate that taking soy phytoestrogen supplements during tamoxifen or aromatase inhibitor treatment may inadvertently promote tumor growth.
One study reported that genistein induced multidrug resistance in ER+/PR+ breast cancer cells, reducing the effectiveness of Adriamycin (doxorubicin) chemotherapy. A 2021 study demonstrated that genistein reduced the treatment effects of cisplatin chemotherapy in a mouse model of breast cancer. Another 2021 study reported that soy isoflavones have the potential to interfere with the effectiveness of Taxol (paclitaxel) chemotherapy. A 2020 study found that genistein promoted tumor proliferation and increased metastasis in an animal model of inflammatory breast cancer (IBC).
Below are links to recent studies concerning these isoflavones. For a more complete list, including less recent studies, please click on genistein or daidzein.