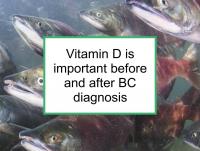 Vitamin D is important before and after BC diagnosis
Vitamin D regulates the flow of calcium into the bloodstream and is crucial for normal bone development. Vitamin D also has a role in regulating parathyroid, neuromuscular, immune, and insulin functions. Vitamin D has been found to be associated with lower risks of cardiovascular disease and age-related cognitive impairment.
In addition, vitamin D appears to help prevent Hodgkin’s and non-Hodgkin’s lymphoma, as well as esophageal, lung, pancreatic, renal, colorectal, endometrial, prostate and ovarian cancer.

Vitamin D influences breast cancer development and progression in important ways, but the relationship is not fully understood. Vitamin D influences the expression of breast cancer-related gene activity, including cell differentiation, cell growth, and angiogenesis, all of which are related to cancer development and progression.
Vitamin D binds to the vitamin D receptor (VDR). The impact of vitamin D on breast cancer is influenced by VDR genotype; women can have one of several variants in the VDR gene and these gene polymorphisms influence the potential anticarcinogenic effects of vitamin D. The effect of vitamin D on breast cancer risk is also modified by the level of calcium consumed since various combinations of calcium and vitamin D can have differing effects on cellular proliferation and differentiation. One study found that certain VDR genotypes are associated with lower risk of breast cancer in women consuming high levels of calcium. In addition, vitamin D has been shown to inhibit the growth of tamoxifen-resistant breast cancer cells in the laboratory, possibly through a VDR-related mechanism.

Intake of vitamin D can be difficult to assess since the vitamin is produced in the skin as well as being a component of some foods. The level of vitamin D in the blood is not necessarily proportionate to the levels in other tissues such as the breast. In addition, it appears that vitamin D may be more influential in protecting against breast cancer when consumed early in life. For these and others reasons, not all population studies have found an association between vitamin D intake or plasma vitamin D and breast cancer.

Generally speaking, “vitamin D” refers to a set of fat-soluble prosteroids and their metabolites. Vitamin D3 (cholecalciferol) is the form most useful to human beings. Vitamin D3 is made in the skin when skin is exposed to sunlight (when the UV index is at least 3). Although some vitamin D supplements contain vitamin D2 (ergocalciferol), it makes more sense to take vitamin D3 since Vitamin D2 is not produced by vertebrates.
Whether obtained from sun exposure to the skin, food, or supplements, vitamin D must undergo chemical reactions to become calcitriol (1,25-Dihydroxycholecalciferol) and become useable in the body. The blood test for vitamin D measures the level of 25-hydroxyvitamin D (25(OH)D, 25OHD, 25-OH-D or 25-OHD), which is the primary metabolic product of vitamin D3 in the blood. Vitamin D deficiency is typically defined as less than either 20 or 25 nmol/L 25(OH)D. In this webpage, by “vitamin D,” we mean vitamin D3 and its metabolites unless otherwise stated.

Levels of vitamin D normally drop during chemotherapy, however this decline is not in itself associated with worse prognosis. Vitamin D supplementation during chemotherapy can raise circulating vitamin D levels and this appears to enhance the treatment effects. The long-term impact on prognosis of taking vitamin D during treatment appears to be favorable:
Based on the available evidence to date, it is acceptable to take vitamin D supplements during most breast cancer treatment.

Vitamin D and risk of breast cancer recurrence or metastasis

Does a vitamin D deficiency at diagnosis predict recurrence? Once a woman has been diagnosed with breast cancer, is there a benefit to increasing the level of circulating vitamin D? Does vitamin D supplementation during and after treatment affect long-term prognosis? A few studies have attempted to answer these questions:

How much vitamin D is optimal?

The optimal 25(OH)D level for breast cancer prevention appears to be at least 40 ng/mL (40 to 50 ng/mL may be an appropriate target range). The appropriate vitamin D3 level goal for women undergoing treatment for breast cancer has not been established.
Optimizing vitamin D levels is not necessarily straightforward. Given that most women get little sun exposure and that there are few food sources of vitamin D, supplementation with vitamin D3 is necessary for most. This is especially true for dark-skinned women for whom vitamin D photosynthesis is less efficient and vitamin D insufficiency is very common. Obesity appears to increase the likelihood of vitamin D deficiency.
Current recommendations of 600 to 1000 units of vitamin D3 per day may not be enough to achieve a 25(OH)D level of 40 ng/mL in a reasonable period of time. Therefore, it might may sense to take 2000 units until 25(OH)D attains this level and then continue with 1000 units per day. Some studies have used doses of as much as 50000 IU/week, a dosage that appears not to result in vitamin D toxicity (which manifests as high levels of calcium in the blood, as well as bone density and kidney problems) in the short term. However, evidence to date suggests that the adverse event threshold is approximately 4000 IU of vitamin D per day for long-term use. Doses as low as 4000 per day have been found to reduce total volumetric bone mineral density and can cause kidney stones in those with genetic susceptibility. The National Academy of Medicine has set the tolerable upper intake level at 4000 IU. In addition, one study reported that individuals with 25(OH)D levels above 100 ng/mL are at increased risk for atrial fibrillation (AF, a type of irregular heartbeat); low vitamin D levels have also been reported to be associated with AF.

In addition to exposing the skin to sunlight, the following foods and supplements are significant sources of vitamin D while also having been found to protect against breast cancer:
Vitamin D appears to act synergistically with calcium in the diet to oppose breast cancer. Adequate (but not excessive) levels of calcium are required to maximize the beneficial effects of vitamin D.

Low levels of vitamin D are associated with higher risk of breast cancer. Adequate vitamin D levels at diagnosis, as well as during and after treatment, have the potential to improve long-term survival. Mega-doses of vitamin D appear inadvisable. Please partner with your oncologist or primary care physician to have your vitamin D level tested and develop a plan to increase it, if indicated.
Below are links to recent studies on vitamin D and breast cancer. For a more complete list of studies, please click on the tag vitamin D. See also our article on how to optimize your breast cancer diet for information on what to eat during all stages of treatment and recovery.