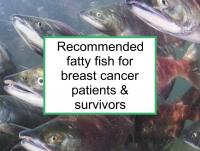 The following fatty fish are recommended, both because of their relatively high levels of omega-3 fats and their relatively low levels of heavy metals such as mercury and other environmental contaminants:
Both smoked fish and pan or deep frying of fish should be avoided since these preparation methods introduce significant levels of carcinogenic polycyclic aromatic hydrocarbons (PAHs) or heterocyclic amines (HCAs).
Farmed fish are more likely to be exposed to environmental estrogens which become incorporated in their flesh. In addition, some farmed fish (among them tilapia) are deliberately exposed to sex steroid hormones to produce mono-sex fish populations (all male or all female) with higher growth rates or other desirable characterics than normal fish populations.
While salmon and the closely-related Arctic char are recommended for consumption during chemotherapy, recent research suggests that herring, sardines, anchovies, mackerel, lake trout and similar fish should not be consumed the day before through the day after a chemotherapy treatment. In addition, these fish should be consumed only in moderation during the remaining days of each cycle. Fish oil supplements should not be consumed by those undergoing chemotherapy. Many fatty fish and fish oil supplements incorporate fatty acids that can induce resistance to a broad spectrum of chemotherapy drugs.

The following fatty fish and other seafood should be consumed infrequently (perhaps two times per month) despite their relatively high levels of omega-3 fats because of their high levels of heavy metals or other environmental contaminants, or salt:
Anchovies and caviar are salty whereas the other fish and shellfish tend to have high levels of mercury or other contaminants.

The marine fatty acid content of fish depends in part on their own food sources. Below is a list of common fish in approximate order of omega-3 fat content:
The fish listed from catfish onwards are not significant sources of omega-3 fats.
Please see our article on how to optimize your breast cancer diet for information on what to eat during all stages of treatment and recovery.