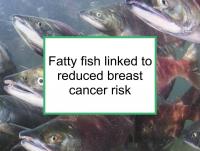 The meta-analysis referenced at the beginning of this news story was designed to examine the associations between intake of marine and other omega-3 fatty acids and breast cancer risk. In addition, the authors attempted to evaluate the potential dose-response relation. To conduct the study, the authors used the PubMed and Embase databases, selecting 21 prospective studies including 20,905 breast cancer cases through year-end 2012. Intake of DHA and EPA from fish oil supplements were included in the analysis.
Relatively high marine fatty acid intake was found to be associated with a 14% reduction in breast cancer risk. The relative risk was similar whether intake was based on diet or measured in tissue. The inverse association between marine fatty acids and breast cancer risk was more pronounced in studies that did not adjust for body mass index (BMI) than in studies that did adjust for it.
The risk of breast cancer was found to be reduced by 5% for each 0.1g per day or 0.1% of energy per day increment of dietary marine fatty acid intake. On the other hand, when overall fish intake (which includes non-fatty fish) or omega-3 from nut and vegetable sources (alpha-linolenic acid) were analyzed, no significant associations with breast cancer risk were found.
The authors commented separately that this result could be partially because of geographic differences in consumption, especially between Asian and Western populations. The authors conclude that higher consumption of dietary marine omega-3 fatty acids is associated with reduced risk of breast cancer. The associations of overall fish and alpha-linolenic acid intake with risk warrant further investigation.
Please see our article on fatty fish for more information.