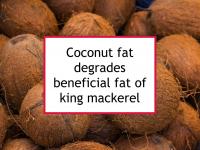 Coconut fat degrades beneficial fat of king mackerel
Coconut fat appears to have both chemopreventive and tumor promoting qualities—study findings are mixed. One study reported that carcinogen-induced mammary tumors in mice were reduced by a coconut oil compared to a corn oil diet. However, coconut oil is a source of myristic acid (18% of total), an omega-5 saturated fatty acid that has been found to be associated with increased breast cancer risk.
One population study in the Philippines found a strong positive association between boiling food in coconut milk (such as in the preparation of yellow coconut curries) and the risk of breast cancer. Another study reported that women in Crete with high levels of myristic acid in their fat tissue were at higher risk of breast cancer than women with low levels.
Like other fatty fish, mackerel contains the beneficial marine fatty acids docosahexaenoic acid (DHA) and eicosapentaenoic acid (EPA), which have been shown to have chemopreventive effects and to enhance the therapeutic effects of tamoxifen. Although mackerel is not generally considered a high mercury level fish, king mackerel and other mackerel from the Gulf of Mexico have been found to have high levels of mercury and other heavy metals. North Atlantic or Pacific mackerel are better choices.
Consumption of fried fish has been found to be associated with increased risk of breast cancer. The heightened risk of breast cancer appears to be a result of heterocyclic aromatic amines (HAAs) produced during cooking, especially when using high temperatures. Common HAAs have been shown to be mutagens (heightening cancer risk by increasing the rate of mutations in genes) and to promote cancer in a manner similar to estrogen. Epidemiological studies and data based on food frequency questionnaires have reported links between a preference for very well-done meat or fish and enhanced risk of cancer that is not explained by other carcinogens in the diet.
Now a new study has reported that frying or boiling king mackerel using coconut oil or milk increases the saturated fat content and also reduces the DHA and EPA content, thereby degrading its potentially beneficial fatty acid profile. While not addressed by the study, it is plausible that preparing other types of fatty fish by frying in coconut oil or boiling in coconut milk could have similar effects.

The study referenced at the beginning of this news story was designed to investigate the influence of cooking in coconut milk or pan frying with coconut oil on the nutritional value of king mackerel. The authors first verified the fatty acid content and other nutritional quality indices of the lipids in king mackerel.
Cooking in coconut milk resulted in declines in both the protein content (11.6% reduction) and ash content (28.3%) of king mackerel. The fat content increased after cooking (253%) and frying (198%), resulting in a higher caloric value. In particular, total saturated fat levels increased sharply after cooking in coconut milk (462%) or frying in coconut oil (418%). Cooking or frying did not cause changes in cholesterol content. The monounsaturated fat levels increased 248% and 130%, respectively. The authors also found that total EPA + DHA was reduced by 21% in the pan fried and 38% in the cooked mackerel, respectively, compared to fresh king mackerel.