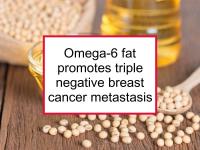 Public health campaigns to reduce levels of consumption of saturated fat and partially-hydrogenated oil have left the impression that vegetable oils are a healthy choice. However, safflower oil, sunflower oil, corn oil, and soybean oil all contain high proportions of linoleic acid and consumption of them should be limited. Better choices are olive oil and walnut oil, which have better fat profiles and are also associated with reduced risk of breast cancer.