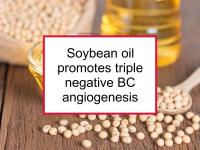 Soybean oil promotes triple negative BC angiogenesis
Increasing awareness of risks linked to saturated fat and partially-hydrogenated oil intake have left some consumers with the impression that cooking with vegetable oil is a healthy choice. Soybean oil is not a significant source of estrogenic soy isoflavones. However, the omega-6 fatty acid linoleic acid predominant in soybean oil and other common vegetable oils has been linked to breast cancer development and progression.
For example, linoleic acid has been shown to induce the migration and invasion of triple negative (ER-/PR-/HER2-) breast cancer cells. Now a new study has shown that exposure to linoleic acid can induce pro-angiogenic activity in triple negative cells.

Below are common cooking oils with high levels of linoleic acid as a percentage of total fat content:
Better choices are olive oil (7% to 15% linoleic acid) and canola oil (19% to 26%).
Note that the breast cancer-linoleic acid connection is not straightforward since omega-6 fats are essential to health. The ratio of omega-6 to omega-3 fats (such as the docosahexaenoic acid (DHA) found in fatty fish) appears to be more important than the absolute amounts of these fatty acids in the diet.