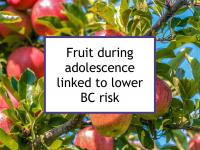 Fruit during adolescence linked to lower BC risk
Few studies have attempted to identify components of diet during the teenage and young adult years that are linked to breast cancer risk in middle age or later adulthood. One of the strongest factors identified to date is adolescent drinking, which has been linked to subsequent breast cancer in several studies. High adolescent consumption of butter and red meat also appear to increase breast cancer risk.
On the other hand, high intakes of foods rich in calcium, carotenoids, dietary fiber, omega-3 fats, and vitamin D each have been found to be associated with reduced breast cancer risk. Now a new study has reported that fruit consumption during adolescence is associated with lower risk of breast cancer.
The risk reduction conferred by fruit intake is stronger for hormone receptor negative (ER-/PR-) than hormone receptor positive (ER+/PR+) disease.

Breast tissue is particularly vulnerable to carcinogens during adolescence since it represents a period of rapid proliferation and differentiation of cells.
The following non-dietary exposures during the teenage years and young adulthood have been reported to be associated with increased risk of breast cancer in adulthood:On the other hand, vigorous exercise during adolescence has been found to reduce the subsequent risks of both premenopausal and postmenopausal breast cancer.