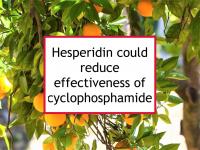 Hesperidin is a flavanone found in oranges, tangerines, kumquats, lemons, limes and grapefruit. Hesperidin is found most abundantly in the peel, pith and membranes of oranges and other citrus fruits. Therefore, food sources also include orange tea, commercial orange juice, orange marmalade, and dishes that incorporate citrus peel such as Szechuan Orange Chicken.

The study referenced at the beginning of this news article was designed to investigate the effects of hesperidin on the actions of cyclophosphamide in mice. Hesperidin has been shown to have chemoprotective effects in tumor cells. In the first experiment, normal mice were treated with hesperidin and then administered a cyclophosphamide injection. Control mice did not receive any hesperidin. Compared to the control mice, the hesperidin-treated mice experienced less decline in the number of white blood cells (induced by cyclophosphamide). White blood cell counts were higher at four and seven days after the cyclophosphamide injection.
A second experiment used mice bearing colon carcinoma (CT-26) tumors rather than normal mice. Treatment with cyclophosphamide will cause tumors to grow more slowly in such mice. Administration of hesperidin was found to significantly inhibit cyclophosphamide-induced tumor growth delay. In other words, mice treated with hesperidin had increased tumor development compared to control animals that did not receive hesperidin. The authors conclude that hesperidin interacts with cyclophosphamide to inhibit its antitumor effect.
Please see our articles on what to eat during Taxol and Adriamycin chemotherapy for more information on how to optimize treatment with chemotherapy.