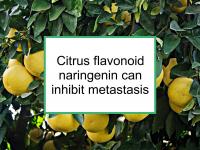 Citrus flavonoid inhibits metastasis
A new study has reported that the flavonoid naringenin can inhibit metastasis in a mouse model of breast cancer. Naringenin is found in citrus fruits (especially grapefruit), and tomatoes. Previous studies have reported that naringenin may contribute to cancer prevention. Metastasis is the primary cause of death in breast cancer patients.
Therefore, there is a need for new adjuvant therapies that can effectively inhibit metastasis. To conduct the study, the authors used a mouse model of breast cancer that mimics clinical situations, including metastasis to the lungs after surgery to remove the primary tumor.
Mice that were fed naringenin had significantly fewer metastatic tumor cells in their lungs and lived longer than simlar mice who did not receive naringenin. This was accompanied by increased antitumor activity by T cells. Additional laboratory studies showed that relief of immunosuppression caused by regulatory T cells might be the mechanism of action by which naringenin inhibits metastasis. The study results indicate that orally administered naringenin can inhibit the outgrowth of metastases after surgery to remove the primary tumor by regulating host immunity.