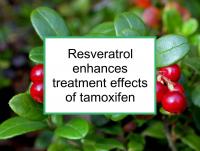 Resveratrol is unique in that it has been found to increase the effectiveness of several types of cancer treatments. For example, resveratrol has been shown to potentiate the effects of various chemotherapy drugs (including Adriamycin, Alkeran, Cisplatin, Taxol and Taxotere), the epidermal growth factor receptor EGFR inhibitor Iressa, and radiation treatment.

Red grapes and purple grape juice, blueberries, and cranberries all have high resveratrol content. These foods have also been found to associated with reduced breast cancer risk. Other foods with significant levels of resveratrol include strawberries, peanuts, and pistachio nuts. Blackberries and raspberries also contain some resveratrol. Red wine is a well known source of resveratrol. However, drinking red wine has been shown to be harmful for breast cancer patients, on balance, as a result of its alcohol content.

Resveratrol supplements are not recommended

Safe and effective dosages of resveratrol supplements have not been established. Cell and animal studies suggest that taking resveratrol in concentrated form could have unintended adverse effects, including potentially increasing the rate of proliferation, migration, and invasion of breast cancer cells at some dosage levels. One study reported that resveratrol alone promoted mammary tumor growth and metastasis in a mouse model of ER- breast cancer whereas it inhibited it in combination with quercetin and catechin (other grape polyphenols). Another study found that supplementation with zinc plus resveratrol in a rat model of breast cancer substantially increased the rate of carcinogenesis and the number of carcinogen-induced mammary tumors.

The study referenced at the beginning of this news story was designed to investigate the effects of resveratrol in hormone receptor positive breast cancer cells. A significant fraction of ER+ tumors have minimal or no initial response to tamoxifen or eventually develop resistance to it. The authors first established a line of tamoxifen-resistant MCF-7/TR breast cancer cells. They then showed that resveratrol was capable of acting synergistically with tamoxifen, triggering programmed cell death (apoptosis) in the tamoxifen-resistant cells. The authors also established how the chemosensitizing effects of resveratrol were conferred. The authors conclude that resveratrol is a potential agent to overcome acquired tamoxifen resistance.
Please see our article on what to eat during tamoxifen treatment for more information.