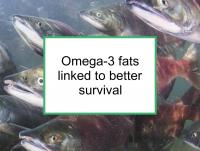 Omega-3 fats linked to better survival
The relationship between dietary fats and breast cancer risk is complex. Most foods with significant fat levels contain a variety of fatty acids, including, in most cases, fatty acids that have been shown to increase breast cancer risk when studied in isolation. There is evidence that the ratio of omega-6 to omega-3 fats in the diet is more important than the absolute amount of either fat.
This can present a somewhat confusing picture of the relationship between fat and breast cancer risk. However, a consensus concerning certain fats emerges when existing studies are considered as a whole.
Generally speaking, high-fat Western diets are associated with increased breast cancer risk, in part because they incorporate high levels of processed meat, butter and other animal fats, as well as fried foods, all of which have been associated with increased breast cancer risk. Saturated fats (found in red meat and dairy products) and trans fats (many commercial baked goods and certain margarines) have been found to promote breast cancer, although not all studies are in agreement. While omega-6 fats (corn oil, soybean oil, safflower oil, sunflower oil) are essential to human health, they also have been shown to promote breast cancer. Relatively high omega-3 intake can offset the potentially deleterious effects of omega-6 intake. Now a new study has reported that mice fed a high omega-3-based diet had a markedly different and less unfavorable mammary tumor microenvironment than mice fed an omega-6-based diet. This led to slower tumor growth and reduced metastases, which in turn resulted in longer survival, in the omega-3-fed mice.

The study referenced above was designed to investigate the effects of dietary omega-6 and omega-3 fatty acids on tumor progression, metastasis and survival using a mouse model of breast cancer. Population studies have found reduced breast cancer risk in women who consume of high levels of long-chain omega-3 fatty acids compared to those who consume low levels. Generally speaking, fatty fish are the best sources of long-chain omega-3 fatty acids (primarily eicosapentaenoic acid (EPA) and docosahexaenoic acid (DHA)). Most plant sources of omega-3s (flaxseed, walnuts) contain the short-chain omega-3 fatty acid alpha-linolenic acid (ALA). The body is able to convert short-chain to long-chain omega-3s to some extent.
To conduct the study, the authors fed two similar groups of 10-week old female mice for 16 weeks with diets containing either (1) omega-3 from fish oil plus some olive oil; or (2) an omega-6 diet with the same calorie and fat levels. All of the mice were then implanted with 4T1 mammary tumor cells. The authors subsequently collected detailed outcome data concerning mammary tumor growth, survival, and metastases in multiple organs. They also assessed dietary regulation of the tumor microenvironment in mice autopsied on day 35 after tumor injection.
Mice in the omega-3 diet group were found to experience a significant delay in the development of measurable mammary tumors and survived longer than mice in the omega-6 group. The omega-3 group mouse tumor size on day 35 after tumor cell injection was half that of the omega-6 group overall. In addition, the omega-3 mice had significantly fewer lung and bone metastases than the omega-6 mice. The number and/or sizes of cardiac, renal, ovarian metastases were also significantly lower in the omega-3 group.
Generally speaking, a tumor microenvironment includes noncancerous cells and proteins present both within the tumor and surrounding it. The microenvironment typically contains immune cells, blood vessel cells and fibroblasts (a type of connective tissue cell), as well as the proteins produced by these cells and the tumor itself. Far from being an isolated or encapsulated ball of cancer cells that is attempting to hide from the immune system, the typical breast tumor helps generate a microenvironment that can subvert the body's defenses.
In the study, the authors found that the tumor microenvironment of the omega-3 mice had significantly lower numbers of proliferating tumor cells, higher numbers of tumor cells undergoing programmed cell death (apoptosis), lower new blood cell formation, and higher infiltration by immune system cells. These relatively favorable characteristics were directly correlated with lower tumor size. The authors conclude that long-chain omega-3 fatty acids modulated the mammary tumor microenvironment, leading to slower tumor growth and reduced metastasis, which in turn resulted in longer survival in this mouse model of breast cancer.
Please see our article on fatty fish for more information on sources of omega-3 fats.