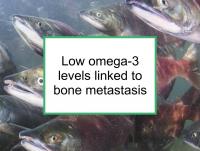 The following foods have been shown to be associated with reduced breast cancer risk, as well as being good sources of omega-3 fats:Note that the conversion of ALA to EPA and DHA can be blocked by the presence of vegetable oils with high omega-6 fatty acid content. These include corn oil, safflower oil, soybean oil, and sunflower oil. Therefore flaxseed, walnuts, and their oils should be consumed separately from such vegetable oils.

The study referenced above was designed to investigate certain factors associated with bone metastasis in women with breast cancer. The study included 261 French women from whom breast adipose (fat) tissue samples were obtained during breast cancer surgery between January 2009 and June 2012. To conduct the study, the authors first used gas chromatography to determine the fatty acid profile of the tissue specimens. They then analyzed how variations in these profiles were associated with any eventual occurrence of bone metastases.
Approximately 70% of the study participants who developed bone metastases had estrogen receptor positive (ER+) (luminal A or luminal B) breast cancer and 59% had positive axillary lymph nodes.
Levels of long-chain omega-3 polyunsaturated fatty acids in the stored breast tissue samples collected during surgery were found to be negatively associated with eventual development of bone metastases in premenopausal women. In other words, women with high levels of EPA and DHA were less likely to develop bone metastases if they were diagnosed with breast cancer before menopause. No significant equivalent relationship was found in postmenopausal women. The authors conclude that, in addition to luminal phenotype and positive lymph node status, low levels of long chain omega-3 fats at diagnosis may increase the risk of bone metastasis formation in premenopausal women.
Please see our article on fatty fish and the omega-3 tag for more information.