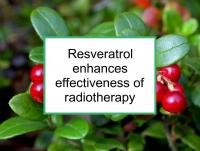 The study referenced above was designed to investigate the potential radiosensitizing effects of resveratrol on ER+/PR+ MCF-7 breast cancer cells. Radioresistance and the side effects of radiotherapy both limit the effectiveness of this treatment. Therefore, identifying compounds that can enhance the cytotoxic effects of radiation in tumor cells while not harming normal cells is important.
To conduct the study, the authors exposed MCF-7 cells to 10 μM of resveratrol plus 3 Gγ ionizing radiation. This treatment had a highly cytotoxic and antiproliferative effect. After 24 hours, the cells showed clear signs of necrosis/senescence. Apoptosis (programmed cell death) was activated through reduction of the Bax/Bcl-2 ratio and increase in caspase 8 activity. In addition, the treatment affected the oxidative cell metabolism by increasing oxidative damage and reducing antioxidant enzymes activity. After 72 hours, it appeared that the antiproliferative effect was associated with a high p53 expression and interruption of cell cycle in the S phase. The authors conclude that resveratrol is a potential radiosensitizer of ER+/PR+ breast cancer cells.