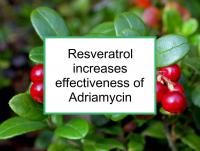 Resveratrol increases effectiveness of Adriamycin
Resveratrol, a polyphenol found primarily in grapes, berries, and nuts, has been found to have powerful anti-cancer properties without being toxic to normal cells. While resveratrol is a phytoestrogen, it exerts chemopreventive effects through multiple pathways — it can inhibit the growth of both hormone receptor positive (ER+/PR+) and hormone receptor negative (ER-/PR-) breast cancer cells.
Resveratrol can also prevent silencing of the BRCA1 gene, a gene that protects against breast cancer through its role in repairing DNA damage. In addition, resveratrol has been shown to increase the effectiveness of a variety of breast cancer treatments. For example, resveratrol has been shown to potentiate the effects of several chemotherapy drugs (Adriamycin, Alkeran, cisplatin, Taxol and Taxotere), the epidermal growth factor receptor (EGFR) inhibitor Iressa, tamoxifen, and radiation treatment. Now a new study has demonstrated how resveratrol enhances the treatment effects of Adriamycin (doxorubicin) in treatment-resistant ER+/PR+ breast cancer cells.

Resveratrol supplements and red wine are not good choices

We urge those undergoing chemotherapy to obtain resveratrol in foods rather than consuming it in supplement form. Safe and effective dosages of resveratrol have not been established. Taking it in concentrated form separate from the other nutrients found in foods could have unintended adverse effects. For example, one study reported that resveratrol alone promoted mammary tumor growth and metastasis in a mouse model of estrogen receptor negative (ER-) breast cancer whereas it inhibited it in combination with other grape polyphenols. Another study reported that supplementation with resveratrol plus zinc in a rat model of breast cancer significantly increased the rate of development and number of carcinogen-induced mammary tumors.
The best food sources of resveratrol for breast cancer patients and survivors are red grapes and grape juice, blueberries and cranberries. Other potentially beneficial foods with significant levels of resveratrol include strawberries and pistachio nuts. Blackberries and raspberries also contain some resveratrol. While red wine is an abundant source of resveratrol, its alcohol content makes it on balance harmful.

The study referenced above was designed to investigate the role of resveratrol in chemosensitivity to Adriamycin chemotherapy. Chemotherapy tolerance, resulting in resistance to treatment, can severely limit the anti-cancer effects of treatment. Resveratrol has been shown to inhibit cancer progression in part by regulating microRNAs. MicroRNAs are RNA fragments that prevent the production of specific proteins by interfering with gene expression. Recent studies have demonstrated that dysregulated microRNAs can contribute to chemoresistance.
To conduct the study, the authors conducted a series of experiments designed to examine resveratrol's activities in ER+/PR+ MCF‐7 breast cancer cells, with a focus on the treatment effects of Adriamycin. The authors also sought to determine the microRNAs associated with resveratrol, their key target proteins, and how these proteins effect cellular activity. It was found that resveratrol caused cell cycle arrest and apoptosis (programmed cell death) in Adriamycin‐resistant breast cancer cells. In other words, resveratrol restored chemosensitivity. This effect of resveratrol was associated with modulation of the critical suppresser, miR‐122‐5p (microRNA 122). The authors demonstrated a major effect of miR‐122‐5p on the regulation of key antiapoptotic proteins and cyclin‐dependent kinases (which can trigger cell growth arrest and cellular senescence) in drug‐resistant breast cancer cells in the presence of resveratrol. The authors conclude that resveratrol enhances the chemosensitivity of breast cancer cells to Adriamycin, apparently through miR‐122‐5p, which is involved in the pathway of cell‐cycle arrest by targeting Bcl‐2 and CDKs.
Please see our article on diet while on Adriamycin for more information.