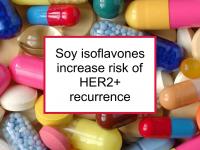 Soy isoflavones increase risk of HER2+
Soy foods and soy isoflavones interact with breast cancer in ways that are not well understood. Hundreds of studies have attempted to uncover aspects of the association, with contradictory results. Numerous factors, including breast cancer type, influence the relationship. Most previous studies have reported anticancer effects for the soy isoflavone genistein in (HER2+) breast cancer cells.
It has been reported that genistein inhibits the growth of HER2+ cells, reduces tamoxifen resistance, and increases the effectiveness of treatment with Herceptin (trastuzumab). Now a new study has reported that Korean HER2+ breast cancer survivors with high levels of soybean consumption have a higher risk of recurrence that those with low intake.

The main soy isoflavones, genistein and daidzein, have varying effects on breast cancer. Genistein accounts for approximately 50% of total soy isoflavones and daidzein accounts for 40%. Studies of HER2+ breast cancer have focused on genestein, whose anticancer action is mediated, in part, by estrogen receptor beta (ERβ). (There are two types of estrogen receptors: estrogen receptor alpha (ERα) and ERβ. Some compounds that bind to ERα do not bind to ERβ and vice versa.) Cell and animal studies have reported a variety of anti-cancer effects for genistein in HER2+ cells and mammary tumors.
An inverse relationship between ER expression and HER2 overexpression has been found in breast cancer (in other words, many HER2+ tumors are ER-). Genistein has been found to inhibit HER2 activation and expression through both ER-dependent and ER-independent mechanisms. Overexpression of HER2 is associated with tamoxifen resistance, and suppression of HER2 expression has been shown to enhance the activity of tamoxifen. Genistein has been shown to sensitize the response of ER+/HER2+ breast cancer cells to tamoxifen treatment. Treatment with high-dose genistein significantly increased the growth-inhibitory effect of Herceptin on HER2+ ERα+/ERβ+ cells in one study. However, this effect was not found in HER2+ ERα- cells.
On the other hand, genistein was found to increase proliferation and tamoxifen resistance in (ER+/PR+) MCF-7 cells that were altered to express HER2 when compared with normal MCF-7 cells in one study. The coexpression of ER and HER2 made breast cancer susceptible to the growth-promoting effects of genistein across a wide range of doses.

The new study referenced at the beginning of this news article was designed to investigate the influence of soy foods and soy isoflavones on breast cancer recurrence, taking into account the hormone receptor and HER2 status of the participants. The study included 339 Korean women with breast cancer. A validated food frequency questionnaire with 103 food items was used to assess intake of soy foods. A total of 25 of the women experienced a recurrence during the study period, of whom 17 patients had HER2- tumors and eight had HER2+ disease.
Soy intake was not found to be associated with cancer recurrence in the study group overall. However, legume intake (mostly from black soybeans) was found to be associated with lower risk of recurrence among women with HER2- disease. On the other hand, HER2+ women with high legume intake experienced a higher risk of recurrence. The authors also estimated isoflavone intake and found that it was associated with reduced breast cancer recurrence among HER2- patients. The authors conclude that soy food intake appears not to influence recurrence for most breast cancer patients, but high intake of soy isoflavones could increase the risk of recurrence in HER2+ patients. Further research is needed to confirm these results due to the small number of cancer recurrence events in the study.

While the Korean study was small and the findings should be tested with more studies, the results are startling. Cell studies use cell lines that differ in important respects from tumors in patients. Therefore, cell studies are typically best used to explain observed effects rather than predicting outcomes, although they are used for both. Cell study results cannot trump findings of carefully designed studies with human patients. On the other hand, Korean women with high consumption of soybeans have a far higher intake of soybeans that almost all U.S. women. Also, there are genetic differences between Asian and European women that could reduce the impact of soy isoflavones for many U.S. women. However, until further studies have confirmed or refuted the association between HER2+ recurrence and soy consumption, the safest course would be for women with HER2+ breast cancer to avoid frequent consumption of soy foods (soy protein isolate, tofu, and edamame — soybean oil is not an abundant source of soy isoflavones) and to avoid genistein and daidzein supplements entirely.
Please see our articles on breast cancer diet for HER2+ patients and survivors, Herceptin, tamoxifen, and genistein for more information.