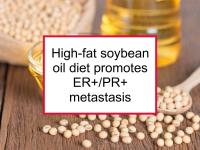 High-fat soybean oil diet promotes ER+/PR+ metastasis
Studies have consistently reported that low dietary omega-3 to omega-6 fatty acid ratios are associated with increased breast cancer risk. The typical U.S. diet has an omega-6 to omega-3 ratio estimated to be 15-to-1 or higher. It has been suggested that an omega-3 to omega-6 ratio of one-to-two or greater would be ideal, although no studies have specifically confirmed this.
The omega-3 to omega-6 ratio appears to have more influence on breast cancer risk than the absolute level of omega-6 fats in the diet. Nevertheless, evidence is accumulating that high omega-6 vegetable oils could promote breast cancer directly.
Previous studies using mouse models of breast cancer have reported that dietary corn oil and soybean oil promote mammary tumor development whereas olive oil, flaxseed oil and canola oil inhibit it. Now a new study has reported that mice fed a high-fat soybean oil-based diet experienced sharply higher levels of mammary tumor development and lung metastases than mice on a standard diet, despite gaining only modest amounts of extra weight.

The oils below have a relatively high proportion of omega-6 fatty acids.

The foods and oils below are excellent sources of omega-3 fatty acids and have also been found to be associated with reduced breast cancer risk.

The study referenced at the beginning of this news story was designed to investigate the influence of a high-fat diet on mammary tumor development and lung metastasis in a mouse model of breast cancer. To conduct the study, the authors used MMTV-PyMT transgenic mice, which are commonly used to study luminal B breast cancer. Luminal B breast cancer, which is less common but has a worse prognosis than luminal A (i.e., classic ER+/PR+/HER2- disease), typically is weakly to moderately ER+ and PR+, can be HER2- or HER2+, and might have low tumor grade, but with higher proliferation and DNA instability than luminal A. ER-/PR+, ER+/PR- and ER+/PR+/HER2+ tumors normally are classified as luminal B.
In the study. three-week old female mice were fed either a high-fat modified standard diet with 45% of calories supplied by soybean oil or the standard diet (with 16% from soybean oil) for eight weeks. The mice had free access to their food, eating as much as they wanted. Mice on the high-fat diet had a slightly (but statistically significant) higher caloric intake than the control mice and their body fat mass also became somewhat higher.
The high-fat diet was found to increase mammary tumor progression by 59% and tumor weight by 60% compared to the standard diet. The high-fat diet was also associated with 1.47 times the number of lung metastases as the standard diet. The high-fat diet resulted in higher levels of proinflammatory signaling molecules such as leptin and angiogenic factors such as VEGF in mouse plasma and mammary tumors.
The authors conclude that the obesogenic high-fat diet promoted tumor development and metastasis in this mouse model of breast cancer, apparently because of increased inflammation- and angiogenesis-related signaling.