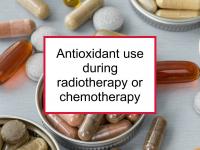 Antioxidant use during radiotherapy or chemotherapy
Breast cancer patients normally are advised not to take antioxidant or multivitamin supplements during treatment with radiation or chemotherapy. In theory, taking such supplements during radiation or chemotherapy has the potential to help protect cancer cells from the toxic effects of treatment.
However, few recent studies have investigated this theory. Now a major new German study has reported that postmenopausal women taking antioxidant supplements during radiotherapy and/or chemotherapy experienced worse recurrence-free survival and higher overall mortality than those not taking such supplements.
In addition to common antioxidant supplements such as vitamin C, vitamin E, and vitamin A, most other micronutrient supplements should also probably be avoided during radiotherapy and chemotherapy. The food recommendations (under various types of treatment) in this website are based in part on findings that certain micronutrients (e.g., resveratrol, quercetin) have been found to increase the effectiveness treatments in laboratory experiments. However, safe and effective dosages for most such supplements during radiotherapy or chemotherapy have not been established. For example, one study reported that resveratrol (alone) promoted mammary tumor growth and metastasis in a mouse model of estrogen receptor negative (ER-) breast cancer whereas resveratrol inhibited it in combination with quercetin and catechin (all three flavonoids are found in red grapes). Another study reported that while quercetin reduced the heart damage associated with Adriamycin chemotherapy, it also reduced Adriamycin's efficacy in some breast cancer cell lines. We recommend obtaining these compounds by consuming food rather than taking them in concentrated form, which could have unintended adverse effects.

The German study referenced above was designed to investigate the impact of supplement use in postmenopausal women after a diagnosis of breast cancer. The study examined associations between use of antioxidants and other supplements and prognosis (recurrence-free survival, as well as total and breast cancer specific mortality) both overall and in those who were treated with chemotherapy and radiotherapy. The study included 2,223 postmenopausal women with nonmetastatic breast cancer in the Mamma Carcinoma Risk Factor Investigation (MARIE) study. A total of 1,940 of the women underwent treatment with chemotherapy and/or radiation. Study participants were interviewed at recruitment (between 2002 and 2005) and again in 2009. The women were followed until June 2015. At total of 36% of the participants reported prediagnosis supplement use; 45% reported postdiagnosis supplement use.
A total of 240 women died (134 from breast cancer) during a median follow-up period of six years after the 2009 interview. There were 200 breast cancer recurrences. Use of antioxidants during chemotherapy or radiation therapy was found to be associated with significantly worsened recurrence-free survival and increased risk of death from any cause. Overall postdiagnosis total supplement use (including antioxidants and other supplements) was not found to be associated with breast cancer prognosis. The authors conclude that antioxidant use during chemotherapy or radiation therapy was associated with worsened breast cancer prognosis in postmenopausal women.
Please see our article on multivitamins for more information.