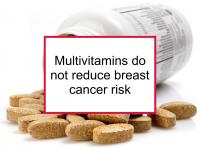 Multivitamins do not reduce breast cancer risk
A new prospective study has reported that multivitamin use does not reduce the risk of premature death or of developing cancer, including breast cancer. The study was designed to investigate the associations between multivitamin/mineral supplement use and risk of premature death or cancer.
Although such supplements are widely used in the U.S., their usefulness in preventing premature death or chronic disease is unclear. The study included 182,099 participants enrolled in the Multiethnic Cohort Study in Hawaii and California at an average age of 60. Participants were enrolled between 1993 and 1996 and followed for an average of 11 years. During this period, 28,851 deaths occurred.
No associations were found between multivitamin use and mortality from all causes, cardiovascular disease, or cancer. The findings did not vary when participants were grouped by ethnicity, age, BMI, preexisting illness, single vitamin/mineral supplement use, HRT use, or smoking status. In addition, no evidence was found that multivitamin use was associated with overall risk of cancer, or risk of cancer at major sites such as the lung, colorectum, prostate, or breast.
Please see our article on how to optimize your breast cancer diet for information on what to eat during all stages of treatment and recovery.