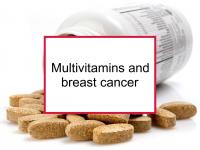 Multivitamins and breast cancer
Many women take multivitamin with mineral supplements ("multivitamins") as part of a strategy to maintain or improve overall health. Such supplements typically include vitamins and minerals at levels that are at minimum high enough to prevent deficiencies in them. In theory, since oxidative stress plays an important role in the development of many cancers, antioxidants might reduce cancer risk.
The question arises whether such supplements may be beneficial in lowering the risk of breast cancer recurrence.

Do multivitamins improve health and survival in healthy populations?

To investigate this question, we first examined the premise that taking multivitamins promotes good health in the general population. Based on the available evidence, multivitamin use might slow cognitive aging but does not appear to reduce risks of developing cardiovascular disease, most cancers, or premature death (from any cause):
These studies suggest little or no effect of multivitamin use in relation to overall mortality for the general population.

Based on the limited available evidence, multivitamin use may or may not prevent recurrence, but antioxidant (e.g., vitamin A, vitamin C, vitamin E) use during radiotherapy or chemotherapy may promote it. It is plausible that supplementation might prevent cancer in women who are deficient in a given micronutrient, whereas the same supplement could promote cancer in women who are not deficient, especially in high doses. For example, vitamin A, folate and copper supplements have all been associated with increased risks of breast cancer.
We conclude that breast cancer survivors should attempt to obtain most of their vitamin and mineral requirements through food rather than taking multivitamins. However, we realize that adequate levels of certain nutrients such as vitamin D and omega-3 fats (found in walnuts, flaxseed and their oils, as well as fatty fish) may be difficult to obtain through diet and supplementation might be appropriate. Women should take advantage of the blood tests that are available to determine their levels of important vitamins and minerals and correct any suboptimal levels through diet and supplements. In addition, note that taking high-dose multivitamins during radiation treatment or chemotherapy could potentially serve to protect cancer cells from the treatments and we would not recommend it.
Below are links to recent studies on multivitamins. For a more complete list of studies, please click on multivitamins. See also our article on how to optimize your breast cancer diet.