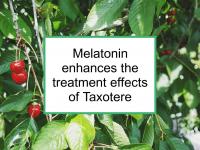 Melatonin enhances the treatment effects of Taxotere
Melatonin is a hormone that communicates information concerning environmental light conditions to various parts of the body, playing a vital role in the synchronization of circadian rhythms (the body clock). Melatonin is synthesized and secreted by the pineal gland in the brain. Disruption of its production is linked to increased breast cancer risk.
For example, long-term night shift work is a risk factor for breast cancer—the risk is highest for women working the most disruptive shifts. Light in the bedroom at night is also associated with increased risk of breast cancer, presumably because it interferes with melatonin production.
While melatonin is known primarily for helping to regulate circadian rhythms, it has also been shown to have direct anticarcinogenic properties and to modulate the effectiveness of some breast cancer treatments. Now a new study has reported that melatonin increases the anticancer effects of Taxotere (docetaxel) in hormone receptor positive (ER+/PR+) breast cancer cells.

Melatonin has been shown to have a variety of chemopreventive and chemotherapeutic activities. Melatonin influences the expression of genes involved in cell proliferation, immune responses, cell adhesion, apoptosis (programmed cell death), cell cycle and angiogenesis in ways that have anticancer effects in breast cancer cells. For example, melatonin induces the expression of tumor suppressor genes. Melatonin also stimulates the differentiation of fibroblasts and decreases aromatase expression and aromatase activity, thereby reducing the number of estrogen-producing cells near malignant cells.
Melatonin has been shown to be effective in regulating angiogenic and inflammatory proteins that contribute to triple negative (ER-/PR-/HER2-) breast cancer progression. Melatonin can also reduce the viability of both ER+/PR+ and triple negative breast cancer stem cells. Pretreatment with melatonin before radiotherapy sensitizes breast cancer cells to the treatment effects of radiation by inhibiting proliferation, inducing cell cycle arrest, and down-regulating proteins involved in DNA repair.

As noted above, melatonin is synthesized and secreted by the pineal gland in the brain. Melatonin is produced at night (or in darkness) and nocturnal light disrupts melatonin synthesis. Blue light wavelengths appear to have a far greater suppressive effect on melatonin production than red wavelengths. Women can maintain their melatonin levels by getting enough sleep, avoiding night shift work and light exposure at night (using red rather than blue or green light when light is necessary), and consuming a melatonin-rich diet.
The foods below are good sources of melatonin and have also been found to be associated with reduced breast cancer risk or recurrence:Sweet corn and rolled oats also contain melatonin. On the other hand, red meat consumption has been shown reduce circulating melatonin.
Melatonin supplements are typically taken to aid sleep or as part of an anti-aging regimen. Although such supplements have been shown to be effective in increasing circulating melatonin levels, there have been few studies concerning the impact of such supplementation on breast cancer risk or breast cancer recurrence. One 2001 study reported that while mice given melatonin in their drinking water from age six months onwards lived longer than untreated control mice, they also developed more tumors. Safe and effective dosages for breast cancer survivors have not been established.

The study referenced above was designed to investigate the cellular mechanisms by which melatonin regulates changes induced by low doses of Taxotere in ER+/PR+ breast cancer cells. Melatonin was found to modulate changes in gene expression profiles induced by treatment with 1 µM Taxotere (equivalent to a typical treatment dose). For example, melatonin increased the expression of the pro-apoptotic BAD and BAX genes, and heightened the inhibition of the anti-apoptotic gene BCL-2 induced by Taxotere. Importantly, these effects were more powerful when the breast cancer cells were treated with melatonin before Taxotere was added.
The authors conclude that melatonin appears to have potential for use as an adjuvant in cancer chemotherapy, and that designing clinical trials using chemotherapeutic drugs in combination with melatonin may be justified.