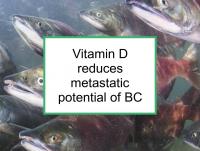 Vitamin D reduces metastatic potential of BC
Vitamin D deficiency is associated with increased risk of breast cancer and its recurrence whereas adequate vitamin D levels at diagnosis and during breast cancer treatment may improve long-term survival. In fact, blood levels of vitamin D have been reported to be inversely correlated with risk of breast cancer.
Vitamin D influences the expression of breast cancer-related gene activity, including cell differentiation, cell growth, and angiogenesis, all of which are related to cancer development and progression. Now a new study has reported that treatment with vitamin D3 inhibits excess glucose production and alters mechanical properties in ways that serve to reduce metastasis in breast cancer cells.

Vitamin D appears to have wide-ranging effects that influence breast cancer development and progression. Normal breast cells lose their ability to respond to Vitamin D's favorable effects during their transformation to a malignant state while increasing their ability to degrade vitamin D.
Vitamin D3 (cholecalciferol) is the most physiologically active form of vitamin D. The blood test for vitamin D measures the level of 25-hydroxyvitamin D (25(OH)D), which is the primary metabolic product of vitamin D3 in the serum. Vitamin D is vital for normal bone development since it regulates the flow of calcium into the bloodstream. However, vitamin D also has important roles in parathyroid, neuromuscular, insulin and immune functions. Vitamin D levels typically are defined either as severely deficient (< 20 ng/mL), deficient (20 to 30 ng/mL), or sufficient (> 30 ng/mL).
However, these levels are based on what is required for bone health; researchers have come to realize that vitamin D levels adequate for bone health might still leave vulnerable individuals at higher-than-average risk of breast cancer.
The optimal vitamin D level for breast cancer prevention appears to be at least 40 ng/mL (40 to 50 ng/mL may be an appropriate target range). Most women can achieve this level by increasing sun exposure (without heavy tanning or sunburn), including vitamin-D rich foods in the diet, and supplementing with 1,000 to 2,000 IU of vitamin D3 per day. Taking megadoses of vitamin D to achieve extra-high levels of vitamin D carries risks of adverse effects and is not recommended.

Vitamin D3 is made in the skin when skin is exposed to sunlight (when the UV index is at least 3). In addition to exposing the skin to sunlight, the following foods and supplements are sources of vitamin D, while also having been found to protect against breast cancer:Both smoked fish and pan or deep frying of fish should be avoided since these preparation methods introduce significant levels of carcinogenic polycyclic aromatic hydrocarbons (PAHs) or heterocyclic amines (HCAs). Although some vitamin D supplements contain Vitamin D2 (ergocalciferol), it makes more sense to take Vitamin D3 since Vitamin D2 is not produced by vertebrates.

The study referenced above was designed to investigate the anticancer activities of vitamin D3 in breast cancer cells. Like other cancers, breast tumor cells tend to have high glycolysis rates to meet their energy demands. This is a form of deviant metabolism whereby the rate of glucose uptake is significantly increased. Together with activation of key proliferative and survival signaling pathways, a high glycolysis rate plays a critical role in tumorigenesis. To conduct the study, the authors treated both ER+/PR+ MCF-7 breast cancer cells (which have a relatively low level of metastasis) and triple negative MDA-MB231 (MB231) breast cancer cells (which are highly metastatic) with vitamin D3.
Treatment with vitamin D3 was found to significantly downregulate glycolytic genes and enzymes, thereby reducing glucose uptake, in both ER+/PR+ and triple negative breast cancer cells. Vitamin D3 was also found to significantly impair cell viability by inducing apoptosis (programmed cell death). These changes were attended by a significant reduction in cell migration, as well as increased cell stiffness. Both of these vitamin D3-induced mechanical changes, which reduce the metastatic potential of the cells, were found to be stronger in triple negative cells than in ER+/PR+ cells. The authors conclude that the results suggest therapeutic and preventive roles of vitamin D3 in breast cancer.
Please see our article on vitamin D for more information.