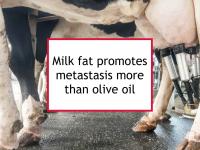 High milk fat diet promotes metastasis in mice
Although not all research is in agreement, a number of studies have reported that full-fat milk intake is linked to increased risk of breast cancer and its recurrence whereas olive oil, especially extra-virgin olive oil, appears to help prevent breast cancer and its progression. Now a new study has compared equivalent milk and olive oil high-fat diets in a mouse model of breast cancer.
Olive oil most often has been compared to corn oil in animal models of breast cancer. However, in the study described below, tumor-prone mice were fed high-fat diets based on either milk fat or olive oil. The olive oil group were found to develop fewer and smaller metastases than the milk group.

The study referenced above was designed to investigate whether high-fat diets differ with respect to breast cancer development and metastasis depending on the whether the fat is derived from milk or olive oil. To conduct the study, the authors used MMTV-PyVT mice, who develop mammary tumors and metastases spontaneously.
The mice were divided into three dietary groups that differed in the type of fat they were fed. One group of mice received a diet enriched with milk fat, which is high in palmitate and myristate (saturated fats common in Western diets). A second group received a diet enriched with olive oil, which had the same number of calories and fat content (42% of calories) as the milk fat diet. Olive oil is high in oleate, an unsaturated fatty acid abundant in the Mediterranean diet. A third group acted as control and received a diet with 12.6% of calories from fat.
The authors found that the high-fat diets neither increased nor inhibited the development of mammary tumors compared to the control diet. At 16 weeks, the mammary tumor weight and volume was equivalent in all three groups of mice. In other words, primary tumors developed as expected in the MMTV-PyVT mice regardless of diet.
However, the lung metastases that developed differed. Mice in the olive oil group were found to have a lower number of lung metastases (assessed by the number of surface nodules) with a decreased area compared to the milk fat group. The authors conclude that different types of fats predominating in high-fat diets might have varying influences on breast cancer metastasis.
Please see our milk and olive webpages for more information.