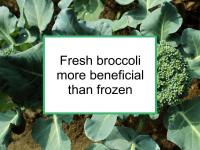 Fresh broccoli more beneficial than frozen
Cruciferous vegetables contain a variety of sulfur-containing compounds called glucosinolates which can be converted into various isothiocyanates that are believed to prevent cancer and its recurrence. Sulforaphane is an isothiocyanate derived primarily from the consumption of broccoli sprouts, broccoli, brussels sprouts, cabbage and bok choy.
Sulforaphane has been shown to reduce the growth of breast cancer stem cells and impair their viability. Sulforaphane has also been found to suppress primary tumor growth in a mouse model of breast cancer, as well as reducing axillary lymph node metastasis in mice.