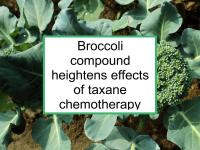 Unlike some plant-based chemopreventive compounds, meaningful amounts of sulforaphane can be obtained from food. However, raw vegetables are best. In addition, lightly cooked fresh broccoli has been shown to be superior to lightly cooked frozen broccoli. Furthermore, raw broccoli sprouts or broccoli are far better sources of sulforaphane than cooked broccoli or freeze-dried broccoli pills. This is primarily because isothiocyanates are obtained from glucosinolates when the enzyme myrosinase is released from damaged plant cells.
Myrosinase is physically separate from glucosinolates in intact plant cells. Chewing or chopping a cruciferous vegetable enables the myrosinase to catalyze the reaction that converts its glucosinolates into isothiocyanates. This is part of the plant defense mechanism which is triggered when, for example, an animal chews the plant. This mechanism is disabled when such vegetables are cooked, although human intestinal bacteria facilitate some formation and absorption of isothiocyanates. In addition, glucosinolates are water soluble and can be leached into cooking water.
The following are the best dietary sources of sulforaphane:
Sulforaphane is also found in meaningful amounts in the following foods:We recommend against consuming sulforaphane or broccoli pills that have been enhanced to boost the proportion of chemopreventive chemicals such as sulforaphane. The anticancer properties of broccoli are likely to be the result of synergistic interaction of its various chemical components. In addition, isothiocyanates may damage the DNA of normal cells at doses obtainable through use of broccoli extracts, sulforaphane supplements, and other concentrated sources.