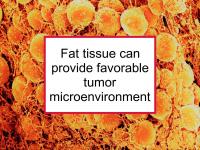 A number of factors appear to contribute to the link between obesity and increased breast cancer risk. These include higher blood insulin and estrogen levels, both of which are known to heighten breast cancer risk. Leptin, a hormone secreted primarily by fat cells, has also been shown to promote breast cancer cell growth.
The heightened systemic inflammation associated with obesity is also believed to heighten the risk of breast cancer. Now a new study has reported that fat tissue itself can directly promote cancer by providing a favorable environment for tumor growth.

Fat tissue can help provide a supportive microenvironment for tumors

The study referenced at the beginning of this news article was designed to investigate whether obesity promotes mammary tumor growth in mouse models of cancer, which would suggest a direct effect of excess white adipose tissue (fat tissue). Adipose stromal cells are multipotential progenitor cells (similar to stem cells) that are readily induced to undergo differentiation. When transplanted into mice, adipose stromal cells can stimulate tumor growth by promoting angiogenesis, perhaps helping explain the obesity-cancer link.
In the study, the authors demonstrated that adipose stromal cells in obese mice moved from white fat tissue to tumors. Importantly, when circulating and tumor-infiltrating cell populations of lean and obese mice were compared, it was found that cancer induced a six-fold increase in circulating adipose stromal cells. Furthermore, adipose stromal cells mobilized in this way could be recruited into tumors, where they could be incorporated into blood vessels (as pericytes) or differentiated into fat cells in an obesity-dependent manner.
In further experimentation, the authors found that fat cells within tumors were associated with increased tumor vascularization and increased proliferation of neighboring malignant cells. The authors conclude that the results suggest that adipose stromal cells recruited from fat tissue can be used by tumors to increase the supportive properties of the tumor microenvironment.
Please see our articles on obesity and weight gain after diagnosis for more information.