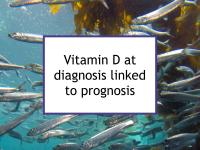 Vitamin D at diagnosis linked to prognosis
Vitamin D deficiency has been linked to increased risk of breast cancer and its recurrence in a variety of studies. While adequate vitamin D levels appear to improve long-term survival, the evidence for this is not as strong. Now a major new California study has reported that women with adequate levels of vitamin D at diagnosis have significantly better survival outcomes than those with low levels.

Vitamin D is vital for normal bone development since it regulates the flow of calcium into the bloodstream. Vitamin D also has important roles in parathyroid, neuromuscular, insulin and immune functions. In addition, vitamin D has wide-ranging effects that affect breast cancer development and progression.
Vitamin D has been shown to modify the expression of breast cancer-related gene activity. For example, it has been shown to favorably influence genes known to promote invasion and metastasis of triple negative (ER-/PR-/HER2-) breast cancer cells. Normal breast cells lose their ability to respond to Vitamin D's favorable effects during their transformation to a malignant state, while increasing their ability to degrade vitamin D.

In addition to exposing the skin to sunlight, the following foods and supplements are significant sources of vitamin D while also having been found to protect against breast cancer:
The optimal vitamin D level for breast cancer prevention appears to be over 30 ng/mL (40 to 50 ng/mL may be an appropriate target range). Taking megadoses of vitamin D to achieve extra-high levels of vitamin D carries risks and is not recommended (please see our article on Vitamin D).

The large prospective study referenced above was designed to investigate the relationship between circulating vitamin D and breast cancer prognosis. The study included 3,995 women with breast cancer enrolled in the Pathways Study, which was established at Kaiser Permanente Northern California in 2006. The women were followed for a median of 9.6 years.
To conduct the study, the authors measured 25-hydroxyvitamin D (25OHD) levels in blood samples collected at the time of diagnosis from study participants, categorizing them as deficient (< 20 ng/ml), insufficient (20 to < 30 ng/ml), or sufficient (≥30 ng/ml). These levels were then evaluated in relation to overall survival, breast cancer-specific survival, recurrence-free survival, and invasive disease-free survival. Lower body mass index (BMI), vitamin D supplement use, and self-reported white race were the strongest predictors of higher vitamin D levels.
Women with sufficient vitamin D levels were found to have significantly better breast cancer-related and overall survival than those with deficient levels. The findings held when taking account treatment and other relevant factors. Associations were similar according to estrogen receptor (ER) status, but were found to be stronger among women with more advanced stage disease at diagnosis and those who were underweight or had normal BMI. African-American women had the lowest vitamin D levels overall, which corresponded to their worse survival compared to white patients.
The authors conclude that sufficient vitamin D levels at diagnosis were associated with improved breast cancer prognosis in this large prospective study. The study provides the strongest evidence yet for maintaining sufficient vitamin D levels in breast cancer patients, according to the authors, including among African-American women and those with more advanced disease.
Please see our article on Vitamin D for more information.