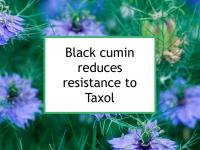 Black cumin, a member of the buttercup family, is available in specialty food stores and online. Black cumin is also known as black seed, Roman coriander, fennel flower, nutmeg flower and black caraway. Hence, it is important to verify that you are purchasing Nigella sativa. Buying organic is best since this reduces the likelihood of contamination or admixture of other spices. Black cumin seeds can be ground and used similarly to black pepper in cooking. Note that black cumin is not related to cumin (Cuminum cyminum), which is a member of the parsley family.
Although black cumin seed oil is available as a supplement, the safety of this more concentrated source of thymoquinone has not been established. Like other compounds with anti-cancer effects found in food, we prefer using thymoquinone at the relatively low dose available in black cumin seeds rather than attempting to obtain pharmacological effects from a higher dose.

The study referenced above was designed to investigate how thymoquinone modifies the treatment effects of Taxol chemotherapy in breast cancer cells. The authors first developed cytotoxic profiles of thymoquinone alone and thymoquinone plus Taxol in (ER+/PR+/HER2-) MCF-7 and T47D breast cancer cells. Thymoquinone was shown to have cytotoxic effects against the cells. In MCF-7 cells, thymoquinone did not change Taxol’s IC50 (the inhibitory concentration needed to achieve 50% cell death), however the combination index was indicative of antagonism. In T47D cells, adding thymoquinone to Taxol increased Taxol’s IC50 from 90±8 nM to 140±20 nM, again with antagonism.
However, the authors found that thymoquinone completely depleted the remaining Taxol-resistant cells in both of the ER+/PR+ cancer cell lines. In addition, cell death (both apoptotic and autophagic) due to the combination of Taxol plus thymoquinone was significantly increased in T47D cells compared to Taxol treatment alone (by 5.6 fold for apoptotic and 1.7 fold for autophagic cell death). In MCF-7 cells, thymoquinone plus Taxol was found to significantly increase autophagic cell death compared to Taxol alone.
The authors then assessed the fraction of tumor-associated stem cell clones (CD44(+)/CD24(-)/(low) in samples of MCF-7 and T47D cells before and after treatment. Thymoquinone alone significantly reduced the tumor-associated stem cell clones (by 12.4±0.8%). Combining Taxol with thymoquinone further depleted cell clones (by 32.3±0.08%). In addition, thymoquinone alone significantly and favorably altered gene expression associated with cell resistance to Taxol. The authors conclude that thymoquinone enhances Taxol's anticancer effects in ER+/PR+ breast cancer cells primarily by depleting tumor-associated stem cells rather than by enhancing Taxol's direct cell killing effects.
Please see our webpages on black cumin and what to eat while on Taxol for more information.