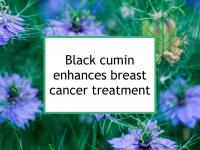 Black cumin enhances breast cancer treatment
We have added a new food to Food for Breast Cancer: black cumin. Below is the write-up.
Black cumin (Nigella sativa) seeds are used as a spice in Indian and Middle Eastern cooking. Thymoquinone, the major bioactive compound in black cumin seeds, has been shown to have anti-oxidant, anti-inflammatory and chemopreventive properties.
In addition to its role as a spice, black cumin has traditionally been used to treat various diseases, including fever, intestinal problems, diabetes, asthma and cancer.

Black cumin is a member of the buttercup family (Ranunculaceae). It is also known as black seed, Roman coriander, fennel flower, nutmeg flower and black caraway. Hence, it is important to verify that you are purchasing Nigella sativa. Organic is best since it reduces the likelihood of contamination or admixture of other spices. Black cumin can be ground and used similarly to black pepper in cooking. Black cumin is not related to cumin (Cuminum cyminum), which a member of the parsley family.
Although black cumin seed oil is available as a supplement, we do not recommend it. The safety of this more concentrated source of thymoquinone has not been established. Like other compounds with anti-cancer effects found in food, we favor using thymoquinone at the relatively low dose available in black cumin seeds rather than attempting to obtain pharmacological effects from a higher dose.