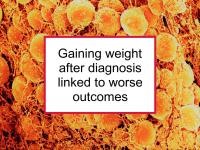 Worse outcomes for weight gain after diagnosis
Many women experience weight gain during chemotherapy and endocrine treatment for breast cancer. This is especially true of patients who were not overweight before diagnosis. Weight gain has been found to be associated with increased risk of death among survivors, although not all studies are in agreement.
The evidence suggests that women should monitor their weight and avoid weight gain after a diagnosis of breast cancer. Adopting a breast cancer diet customized to their breast cancer subtype would accomplish this goal for most women since the majority of recommended foods are not fattening. Whether losing weight after diagnosis improves prognosis is an open question.

The popular view is that cancer results in spontaneous weight loss, but this typically occurs only if the cancer has metastasized. Nevertheless, for most women, the weight gain after breast cancer is modest - one study estimated that a weight gain of more than 22 lbs takes place in fewer than 10% of breast cancer survivors. Women with significant levels of systemic inflammation (as evidenced by elevated circulating C-reactive protein) at diagnosis are more likely to gain body fat over the following year. Unfortunately, both weight gain and increases in the proportion of body fat heighten inflammation (which promotes breast cancer development) even more.

Which women gain weight during treatment?

Chemotherapy-induced weight gain tends to be particularly pronounced in premenopausal women and normal weight women. In addition, unfavorable changes in body composition (including loss of lean and increase in fat tissue) can occur even without weight gain. One study reported that younger women and women who were underweight or normal weight at the time of cancer diagnosis were the most likely to gain weight and to experience increases in percent body fat. Average weight gain varies according to the type of chemotherapy regimen. A large minority of women, including some whose weight was stable during treatment, also experience progressive weight gain in the years after treatment.
However, note that one study reported that weight loss during anthracycline chemotherapy was associated with poorer survival in women with early stage breast cancer than stable weight.

How much weight do women gain over time?

One U.S. study that examined weight gain among women aged 40 to 54 who received chemotherapy reported that women of normal weight gained an average of 4.3 pounds during the first year. On the other hand, overweight women lost an average of 3.0 pounds and obese women lost 4.1 pounds. Neither overweight nor obese women experienced a proportionate increase in body fat. Reduced physical activity was associated with weight gain. Younger age and treatment with tamoxifen were associated with increased fat mass in the torso.
Another study followed Chinese stage 0-III breast cancer survivors for three years after diagnosis. The median weight change was only 2.2 lbs six months after diagnosis. However, approximately 26% of the women gained at least 5% of their at-diagnosis body weight during the first six months and 33% gained at least 5% by 36 months post-diagnosis. Greater weight gain was found among women who had lower body mass index (BMI) at diagnosis, had more advanced disease stage, were younger, were premenopausal, or who had been treated with chemotherapy or radiation treatment during the first six months after cancer diagnosis.
One study examined weight changes over three years among premenopausal women undergoing endocrine therapy (tamoxifen or the aromatase inhibitor Arimidex) while also undergoing ovarian suppression. BMI was found to increase in both the tamoxifen and Arimidex study arms after one, two and three years of treatment. The increase was significantly higher in patients treated with tamoxifen compared to Arimidex after one, two and three years (BMI increase of 1.10 compared to 0.74 kg/m² after three years).
Another U.S. study examined weight gain during chemotherapy by type of regimen. The most common regimens of patients in the study were docetaxel/cyclophosphamide (TC) and doxorubicin/cyclophosphamide followed by paclitaxel (dose-dense AC-T). Weight changes differed significantly between regimens. Women receiving TC gained 2.8 lbs, on average, whereas those on dose dense AC-T lost 1.2 lbs.

The majority of studies that have investigated the influence of weight gain after diagnosis have concluded that weight gain reduces survival compared to no weight gain:

Does losing weight after a diagnosis of breast cancer improve outcome?

Generally speaking, studies have not focused on the impact of weight loss on breast cancer prognosis. This is partly because significant intentional weight loss during the first year after diagnosis is relatively rare. Any weight loss that does occur could be the result of as yet undetected metastatic disease.
Two studies have attempted to determine whether losing weight would improve survival of initially obese breast cancer patients by using mouse models of breast cancer. Mammary tumor growth in the formerly obese mice was found to be significantly higher than in control mice who had never been obese. This was despite the fact that the formerly obese mice had lost all of their excess weight before being implanted with tumor cells. Achieving normal weight might not be sufficient to reverse the effects of long-term obesity on epigenetic changes and inflammatory signals in the tumor microenvironment that promote breast cancer progression.
On the other hand, weight loss that occurs following bariatric surgery appears to greatly improve prognosis among breast cancer survivors.
Please see the tag (BMI - obesity) for more information.