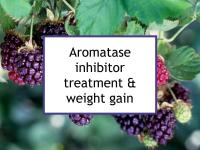 Weight gain is common, but not inevitable

Weight gain while on an aromatase inhibitor is not a simple matter of increased appetite. The manipulation of estrogen receptor (ER) signaling by endocrine treatments helps prevent ER+ breast cancer growth but also has some consequences that are not beneficial for patients. Among them are a tendency to interfere with fat cell development, promoting the formation of extra-large fat cells. This leads indirectly to increased circulating insulin, insulin resistance, and glucose intolerance, all of which encourage weight gain (and the development or worsening of type 2 diabetes).