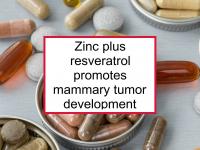 Zinc plus resveratrol promotes tumors
Zinc is vital to human health. It is needed for optimal functioning of the brain, nervous system, and immune system, as well as blood sugar regulation, bone metabolism, protein synthesis, collagen formation, and enzyme production. Zinc's part in breast cancer development and progression is not well understood.
Because of its multiple roles, the effect of zinc might be influenced by the presence of other nutrients. Population studies have produced conflicting results as to whether zinc increases or reduces breast cancer risk. Now a new study has reported that supplementation with zinc plus resveratrol promotes mammary tumor development in a rat model of breast cancer.

The study referenced in the news story above was designed to investigate the effects of supplementation with zinc plus either resveratrol or genistein on carcinogen-induced mammary tumors in a rat model of breast cancer. The authors also examined treatment-associated changes in the concentrations of zinc, copper, magnesium, iron and calcium (all of which have known or suspected roles in promoting or preventing breast cancer) in tumor compared to normal mammary gland tissue.
Resveratrol (found in red grapes, blueberries, blackberries and cranberries) has the ability to suppress proliferation of breast cancer cells and promote cell death, as well as inhibiting aromatase activity, which is important for reducing the growth-stimulatory effects of estrogen in hormone receptor positive breast cancer. Genistein (found in soybeans) appears to help prevent breast cancer when consumed as part of soy foods that are not highly processed. However, although the evidence is not clear cut, genistein supplements appear to promote breast cancer.
To conduct the study, female rats were fed a standard diet and administered a carcinogen (DMBA) which reliably produces mammary tumors. The rats were divided into groups and treated with (1) zinc, (2) zinc plus resveratrol, or (3) zinc plus genistein from 40 days to 20 weeks of age. For comparison purposes, a control group of rats did not receive any of the supplements. DMBA-induced mammary tumor development was not found to be inhibited by any of the treatments. In fact, tumors developed at an accelerated rate in the zinc plus resveratrol group, contrary to expectations.
Copper and iron were found to accumulate in the rat mammary tumors, regardless of supplement regimen. Elevated copper and iron levels have also been observed in human breast tumors. A considerable reduction in the magnesium content of the rat mammary tumors compared to normal mammary tissue was also observed. The combination of zinc plus resveratrol resulted in the largest differences in copper, iron and magnesium between tumor and normal tissue.
The authors conclude that supplementation with zinc plus resveratrol in a rat model of breast cancer considerably promotes the rate of carcinogenesis and increases the number of DMBA-induced mammary tumors.