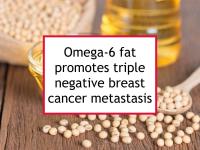 A low dietary omega-6 to omega-3 fatty acid ratio has been found to be associated with reduced breast cancer risk. While both omega-3 and omega-6 fats are necessary for health, the typical U.S. diet contains an abundance of omega-6 fatty acids, whereas consumers have to make a special effort to obtain omega-3s.
The omega-3 fatty acid alpha-linolenic acid found in plant-based foods such as walnuts is converted in the body to the omega-3 fatty acids eicosapentaenoic acid (EPA) and docosahexaenoic acid (DHA). These are the omega-3 fats found in abundance in fatty fish that appear to protect against breast cancer. However, a high linoleic acid diet can interfere with the conversion of alpha-linolenic acid to EPA and DHA, according to a study performed in rats.

While beneficial, the trend away from animal fats (such as lard) and partially hydrogenated oils in processed foods and fast food meals has left the false impression that high omega-6 fats such as soybean oil and corn oil are "healthy." Below are some dietary sources omega-3 fats that have also been reported to be associated with reduced breast cancer risk, as well as some common sources of omega-6 fats. Reducing consumption of omega-6 fats can be an important part of a strategy to improve your dietary omega-6 to omega-3 fat ratio.The study referenced at the beginning of this news story was designed to investigate the mechanism of action by which linoleic acid induces migration of MDA-MB-231 triple negative breast cancer cells. Linoleic acid, an essential fatty acid which represents the major omega-6 polyunsaturated fatty acid in Western diets, can induce systemic inflammation, which contributes to chronic disease such as cancer. In breast cancer cells, linoleic acid has been shown to induce migration, one of the first necessary steps in metastasis. However, the signal transduction pathways involved in migration and whether linoleic acid induces invasion in triple negative breast cancer cells have not been determined. A signal transduction pathway is a set of chemical reactions within a cell that are triggered when a specified molecule attaches to a receptor on the cell membrane. Once cancer cells acquire the ability to migrate, or move, within their primary tumor, they must invade surrounding tissues or internal tumor vasculature to start the process of establishing a new tumor at a distant site.
In the study, the authors demonstrate that linoleic acid induces Akt2 activation, invasion, an increase in NFκB-DNA binding activity, miR34a upregulation and miR9 downregulation in triple negative breast cancer cells. Activation of the Akt gene is frequently observed in human cancer cells. The authors found that Akt2 activation requires EGFR and PI3K activity, but migration and invasion are dependent on FFAR4, EGFR and PI3K/Akt activity. The authors conclude that linoleic acid induces migration and invasion through an EGFR-/PI3K-/Akt-dependent pathway in triple negative breast cancer cells.
Please see our article on diet for triple negative patients for more information.