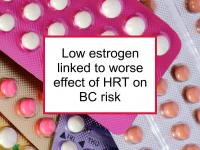 Low estrogen linked to worse effect of HRT
Hormone replacement therapy (HRT), also known as menopausal hormone therapy, is drug treatment designed to replace female hormones whose levels decline sharply due to menopause. Most U.S. women are prescribed combination or combined HRT, which consists of estrogen plus progestin, rather than estrogen-only HRT.
Strong evidence that combined HRT use could increase breast cancer risk was first reported in 2002—participants in the Women’s Health Initiative trial who were taking combined HRT were found to have significantly higher rates of breast cancer than those who were not.
Breast cancer rates declined in every country for which data was analyzed after the publication of the Women’s Health Initiative results caused a drop in the use of HRT. Now a new study has reported that women with the lowest levels of estrogen (who are likely to have the most severe menopausal symptoms) when starting HRT experience the greatest increase in breast cancer risk as a result of combined HRT.
HRT promotes some types of breast cancer, such as lobular breast cancer, more than others, and certain women are more susceptible to the effects of HRT than others. For example, combined HRT increases breast cancer risk more for women who experience breast tenderness during combined HRT use or who have dense breasts than for other women.
Short-term HRT use is safer than long-term use, but even short-term use can increase risk. HRT increases breast cancer risk more for perimenopausal and menopausal women than older women.
Generally speaking, estrogen-only HRT is safer than combined HRT, but this does not hold for high-risk women who might already have small, undetected tumors. The problem is that for women with existing but undetected estrogen receptor positive (ER+) tumors (some of which might otherwise never develop into life-threatening disease), estrogen-only HRT could stimulate tumor growth. Nor are bioidentical hormones necessarily safe to the extent that they relieve symptoms by increasing estrogen levels. Any form of HRT appears to be unsafe for breast cancer survivors.

Women with noticeable menopausal symptoms have lower estrogen levels as a result of going through menopause compared to women with limited or no symptoms. For example, hot flashes are a side effect of decreased circulating estrogen. Several previous studies have reported that the greater the intensity of hot flashes, the lower the risk of breast cancer.
For women undergoing anti-estrogen treatment (typically, an aromatase inhibitor or tamoxifen), having vasomotor (hot flashes, night sweats), genitourinary (vaginal dryness, frequent urinary tract infections, urinary incontinence, sexual dysfunction), or musculoskeletal (joint pain, fractures) symptoms is associated with improved survival compared to not having such side effects while on treatment.
Since HRT reduces menopausal symptoms by increasing circulating hormone levels, it might also extinguish the risk advantage conferred by having a dramatic drop in estrogen as a result of menopause or having completed anti-estrogen treatment.

The study referenced at the beginning of this news article was designed to investigate the influence of pre-treatment hormone levels on breast cancer risk due to the use of combined (estrogen plus progestin) HRT. To conduct the study, the authors used data from the Women's Health Initiative, which included 16,608 postmenopausal women with no history of breast cancer or hysterectomy. The women ranged from 50 to 79 years in age and were followed for an average of 5.6 years.
A total of 348 of the participants developed breast cancer during follow-up; these breast cancer cases were matched with 348 women who did not develop breast cancer and served as controls. The baseline and one-year sex hormone (estrogens, testosterone, progesterone, and sex hormone-binding globulin (SHBG)) levels for cases and controls were compared. Consistent with other studies that have reported higher breast cancer risk for women with higher levels of circulating estrogen, breast cancer risk was found to be elevated among women with higher baseline levels of total estradiol, bioavailable estradiol, estrone, and estrone sulfate.
Combined HRT increased the estrogen levels of study participants at the one-year mark and these increases were associated with higher breast cancer risk. The effect of combined HRT on risk was found to be strongest in women whose baseline levels of total estradiol, bioavailable estradiol, and estrone were lowest (in the lowest fourth or quartile). For example, the risk of breast cancer associated with combined HRT use compare to non-use (placebo) was almost two and one-half times higher for women in the lowest total estradiol quartile compared to those in the highest quartile.
The authors conclude that women with lower pre-HRT circulating estrogen levels are at greater risk of breast cancer during combined HRT therapy than those with higher levels. Further studies are warranted to confirm these findings, according to the authors.
Please see our article on HRT and breast cancer for more information