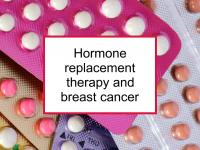 Hormone replacement therapy and breast cancer
Combined hormone replacement therapy (HRT), which consists of estrogen plus progestin, is associated with increased breast cancer risk, although studies are not in agreement as to the extent of the increase. HRT is also known as menopausal hormone therapy. Combined HRT promotes some breast cancer types more than others and certain women are more susceptible to the effects of HRT.
Short-term use is safer than long-term use, but even short-term use can increase risk. HRT increases risk more for perimenopausal and menopausal women than older women. One study reported that HRT use cancels out the benefits of exercise in reducing breast cancer risk. Generally speaking, estrogen-only hormone therapy is safer than combined HRT, but this does not hold for high-risk women who might already have small, undetected tumors. Any form of HRT appears to be unsafe for breast cancer survivors.

HRT promotes some breast cancer types more than others

HRT after oophorectomy can influence survival of BRCA carriers

A 2021 study reported that use of HRT to counteract menopausal symptoms after prophylactic removal of the ovaries appeared to be safe up to age 45 but tripled breast cancer risk among BRCA1 and BRCA2 mutation carriers over 45. The risk conferred by HRT use appears to be related to time of exposure. i.e., it is greater starting around the natural age of menopause.

The timing of HRT, including the age at which it is started and the duration of use, determines the degree of risk. HRT use is most harmful before menopause; the excess risk of breast cancer declines with age and appears to disappear by age 65. Although HRT use appears to increase breast cancer risk almost immediately, long-term use (over five years) heightens the risk. When initiated close to menopause, even short durations of combined HRT use are associated with increased breast cancer risk.
A French prospective study reported that combined HRT use influences breast cancer risk in relation to the time that has elapsed between the onset of menopause and the initiation of HRT. The study included 53,310 postmenopausal women who were followed for an average of 8.1 years, during which time 1,726 developed breast cancer. The risk of breast cancer increased 1.5-fold for short-term (two years or less) use started during the first three years following the onset of menopause, whereas there was no increase in breast cancer risk for short-term use initiated after the three-year mark. In other words, women who started HRT at some point during the three years after menopause had an elevated risk of breast cancer even if the HRT was taken for only two years or less. Note that the combined HRT regimens typically used in France are formulated differently from U.S. regimens.

Unlike the case of many other postmenopausal breast cancer risk factors, the increased risk associated with combined HRT becomes detectable in less than two years of use and the excess risk also disappears quickly after cessation of short-term HRT use. This pattern suggests that combined HRT might act in the short term by stimulating the growth of existing micro-tumors, in addition to promoting the generation of new tumors with longer-term use.
Similarly, estrogen-only hormone therapy appears to be protective against breast cancer only for lower-risk women. The interaction between breast cancer development and estrogen is not straightforward. For example, childhood exposure to estrogen or estrogenic compounds found in soybeans and cow's milk are known to reduce breast cancer risk in adulthood. Even in adulthood, consumption of some phytoestrogens are associated with reduced breast cancer risk whereas others increase it under certain circumstances. Therefore, it is not farfetched to suggest that estrogen-only hormone therapy could protect against breast cancer for many women. The problem is that for women with existing but undetected tumors (some of which might not otherwise have developed into life-threatening disease), estrogen-only hormone therapy could stimulate tumor growth. Nor are bioidentical hormones necessarily safe in this circumstance. It appears unwise for breast cancer survivors to use any form of HRT.
Below are links to recent studies on this topic. For a more complete list of studies, please click on HRT.