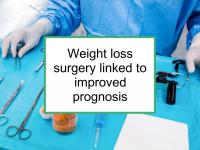 Weight loss surgery linked to improved prognosis
Women with early stage breast cancer (cancer that has not spread beyond the breast or axillary lymph nodes) who gain weight after diagnosis have a less favorable prognosis than those who do not. This includes weight gain during treatment and after treatment has been completed. Losing weight through diet and exercise can improve a woman's hormonal profile.
Breast cancer survivors who lose weight can reduce circulating estrogen, improve insulin resistance, and reduce markers of angiogenesis. However, while intentionally losing weight might improve the prognosis of triple negative (ER-/PR-/HER2-) survivors, it is not clear that it has the same beneficial influence on hormone receptive positive disease (ER+/PR+) disease. Now a new study has reported that weight loss surgery appears to greatly improve prognosis among breast cancer survivors.

Relatively few studies have focused on the impact of weight loss on breast cancer prognosis. This is partly because significant intentional weight loss during the first year after diagnosis is relatively rare. Also, any weight loss that does occur could be the result of as yet undetected metastatic disease. The few available animal studies suggest that intentionally achieving normal weight might not be sufficient to reverse the effects of long-term obesity on epigenetic reprogramming and inflammatory signals in the tumor microenvironment that promote breast cancer progression.
For example, two studies using mouse models of breast cancer have investigated whether losing weight could improve survival of initially obese breast cancer patients. The outcomes of obese mice and formerly obese mice who were implanted with tumor cells were compared to that of mice who had never been obese. Mammary tumor growth in the formerly obese mice was found to be significantly higher than in mice who had always been lean. This was despite the fact that the formerly obese mice had lost all of their excess weight before being implanted.