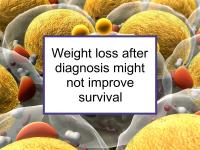 Weight loss after diagnosis might not improve survival
Being obese at diagnosis is associated with worse breast cancer prognosis than being of normal weight or overweight (BMI ≤ 30 kg/m²). Obese women appear to be less likely to respond favorably to chemotherapy and aromatase inhibitor treatment in the short term. The longer-term effects of systemic treatment also appear to be lost more rapidly in obese breast cancer patients.
In addition, weight gain after diagnosis has been found to reduce survival compared to no weight gain. These findings suggest that losing weight after diagnosis could improve outcomes.
However, few studies have focused on the impact on survival of intentional weight loss. This is partly because significant weight loss during the first year after diagnosis is relatively rare. Also, it is difficult to account for weight loss that occurs as the result of as yet undetected metastatic disease. Now a new meta-analysis of previous studies has reported that there is a lack of reliable evidence that weight loss improves survival for overweight and obese breast cancer survivors.

A number of factors appear to contribute to the link between obesity and increased breast cancer risk. Obesity increases aromatase activity (estrogen production) within the breast. Obese women have higher circulating insulin and estrogen levels, both of which are known to heighten breast cancer risk. Leptin, a hormone secreted primarily by fat cells, has also been shown to promote breast cancer cell growth.
The heightened systemic inflammation associated with obesity is also believed to heighten the risk of breast cancer. Furthermore, fat tissue itself can directly promote cancer by providing a favorable environment for tumor growth. For example, fat cells within tumors have been found to be associated with increased tumor vascularization and increased proliferation of neighboring malignant cells.
Losing weight through diet and exercise can improve a woman's hormonal profile. Overweight women tend to have higher levels of certain sex hormones than normal weight women, with the largest difference for estradiol. On the other hand, overweight women generally have lower levels of sex hormone binding globulin (SHBG), a compound that binds to estradiol, thereby reducing breast cancer risk. Both diet and exercise can alter circulating hormone levels. Calorie restriction has been shown to reduce harmful hormone levels even in the absence of exercise. Exercise itself can lower hormone levels, especially estradiol. In addition, overweight postmenopausal women can reduce biomarkers of angiogenesis by losing weight. In fact, losing weight has been shown to reduce risk of breast cancer recurrence in some studies, but not to the extent expected.

Two studies using mouse models of breast cancer have investigated whether losing weight could improve survival of initially obese breast cancer patients. The outcomes of obese mice and formerly obese mice who were implanted with tumor cells were compared to that of mice who had never been obese. Mammary tumor growth in the formerly obese mice was found to be significantly higher than in mice who had always been lean. This was despite the fact that the formerly obese mice had lost all of their excess weight before being implanted. Achieving normal weight might not be sufficient to reverse the effects of long-term obesity on epigenetic changes and inflammatory signals in the tumor microenvironment that promote breast cancer progression.
These and other findings suggest that while women should monitor their weight and do their best to avoid weight gain after a diagnosis of breast cancer, the focus of diet should be to reduce inflammation and avoid spikes in insulin and blood sugar rather than weight loss per se. In fact, women who follow the food lists and other advice in the Food for Breast Cancer webpages concerning their breast cancer types and treatments tend to lose weight without focusing on calorie intake.

Latest research reports that weight loss studies might not be reliable

The meta-analysis referenced at the beginning of this news article was designed to investigate the influence of weight loss on mortality in cancer survivors with obesity-related cancers. To conduct the study, the authors searched the PubMed and EMBASE databases for relevant studies. A total of five observational studies were included in the meta-analysis - all concerned breast cancer survivors. Four of the studies reported that weight loss was associated with increased mortality in overweight/obese survivors; the fifth found no significant association. Non-overweight study participants experienced similar results. Quality assessment indicated high risk of bias across studies. In other words, high risk that multiple replications of the same study would reach the wrong answer on average.
The authors conclude that, currently, there is a lack of reliable observational evidence that weight loss improves survival for overweight and obese breast cancer survivors. However, there is considerable potential for bias in these studies. Existing studies likely reflect the consequences of disease-related rather than intentional weight loss. There is a need for stronger study designs, according to the authors, incorporating measures of intentionality of weight loss.
Please see our article on weight gain after diagnosis for more information.