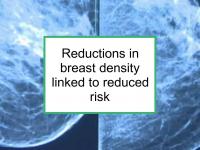 Reductions in breast density reduce risk
A new prospective study recently presented at the annual American Association for Cancer Research (AACR) Meeting in Washington, D.C. has reported that women with a decrease in mammographic breast density over time may have decreased breast cancer risk compared to women whose breast density remains stable.
Mammographic breast density is known to be one of the strongest risk factors for breast cancer. However, breast density appears to be modifiable and it is possible that declines in breast density might result in lowered risk of breast cancer.
The study included members of the Mayo Mammography Health Study cohort, which enrolled 19,924 women who were having screening mammograms at the Mayo Clinic, Rochester, between 2003 and 2006. Participants were at least 35 years old and had no prior breast cancer history. The four-category BI-RADS clinical density measure (almost entirely fat, scattered density, heterogeneous density and extremely dense) was assessed on all the mammograms in the study.
The association between changes in BI-RADS density and risk of breast cancer was examined using a case-cohort design consisting of 241 breast cancer cases and a random selection of 2,300 women in the cohort (of whom 28 developed cancer). BI-RADS densities measured from the earliest available mammograms and enrollment mammograms (six years apart, on average) were used to determine density change. Changes in breast density were adjusted for changes in body mass index (BMI), postmenopausal hormone replacement therapy (HRT) use, and menopausal status. Analysis over time (longitudinal analysis) was performed on the 219 breast cancer cases and 1,900 non-cases who had at least one pre-enrollment mammogram.
Compared to non-cases, breast cancer cases were generally older (56.8 vs. 52.9 years), more likely to be postmenopausal (73.4% vs. 61.6%), had higher BMI (29.0 vs. 28.1) and were more frequently screened (8.0 vs. 6.9 pre-enrollment mammograms). As expected, breast cancer cases were more likely to have high breast density (BI-RADS=4) at earliest mammogram compared to non-cases (16.2% vs 14.3%). Cases were also less likely than non-cases to experience a reduction of one or more density categories (37.0% vs. 38.6%) following earliest mammogram.

Women who dropped one or more BI-RADS categories over an average of six years were found to have 28% lower risk of breast cancer than those whose density remained unchanged. On the other hand, women who experienced an increase in breast density of one or more BI-RADS categories experienced over 50% higher risk, although this finding was not statistically significantly.
The authors conclude that women with a decrease in mammographic breast density over time may experience reduced breast cancer risk compared to women whose breast density remains stable.