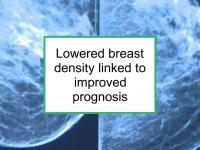 Breast density may be increased by exposure to certain endocrine disruptors found primarily in food packaging, personal care products and cigarettes. Animal experiments have demonstrated that prenatal exposure to cadmium, bisphenol A (BPA), phthalates, and endocrine disrupting pesticides results in greater mammary gland density.
For example, a study that evaluated the effects of BPA (at a level comparable to that found in humans) on fetal mammary gland development in rhesus monkeys reported that the density of mammary buds was significantly increased in BPA-exposed monkeys compared to unexposed monkeys.

The study referenced at the beginning of this news story was designed to investigate the extent to which changes in breast density as a result of tamoxifen treatment can be used to measure response to treatment. To conduct the study, the authors examined medical records and other data concerning 974 postmenopausal women with breast cancer who had a mammogram at baseline (before treatment) and during follow-up. A total of 474 patients received tamoxifen and 500 did not. Change in mammographic density was expressed as percentage change between baseline and follow up. Results were adjusted for relevant patient and tumor characteristics. The women were followed for 15 years, during which time 121 (12.4%) of them died from breast cancer.
Women in the tamoxifen group who experienced a reduction in breast density of over 20% between baseline and first follow-up mammogram were found to have a 50% lower risk of breast cancer-specific death compared to those with stable breast density. No significant association between mammographic density change and survival was found in the no-tamoxifen group.
The authors conclude that a reduction in mammographic density in breast cancer patients appears to serve as a prognostic marker for improved long-term survival in patients receiving tamoxifen.
Please see our articles on breast density, endocrine treatment, cadmium, BPA and phthalates for more information.