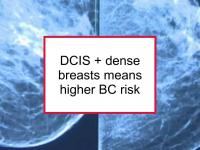 DCIS + dense breasts means higher BC risk
A new study has reported that women with ductal carcinoma in situ (DCIS) are more likely to have a recurrence in either breast if they have dense breasts. In fact, the risk of invasive breast cancer appears to be higher in the contralateral breast (the breast not affected by DCIS).
The study was designed to investigate whether mammographic density predicts risk of second breast cancers in women with DCIS. The study included 935 DCIS patients treated with lumpectomy at Kaiser Permanente Northern California during the period 1990 to 1997. A total of 164 or 18% of the study participants were diagnosed with additional breast cancer in the same breast as the original DCIS during the follow-up period (median: 103 months) and 59 (6%) developed a new primary cancer in the contralateral breast (i.e., the other breast).
Breast density was evaluated in terms of size of area with high density. The women in the study with the greatest total area of density (top fifth of values) were found to be at twice the risk of invasive breast cancer in either breast as those with the smallest area of density (bottom fifth).
The women in the top fifth of breast density were also at 70% higher risk of ductal breast cancer (DCIS or invasive) in the same breast and three times the risk of contralateral breast cancer. The authors also found some evidence of increasing risk of contralateral breast cancer with increasing percent density.
The authors conclude that women with DCIS who have dense breasts may be at higher risk of subsequent breast cancer, especially in the contralateral or opposite breast.

Comments regarding the study

Although at first it may appear puzzling that the risk of invasive breast cancer might be higher in the breast not initially affected by DCIS, it makes sense if we consider that high breast density is a strong risk factor for breast cancer.
By surgically removing the DCIS from the initially affected breast, the area with the highest risk was probably removed. Remaining areas of dense tissue, including in the other breast, remain at high risk for both DCIS and invasive breast cancer.