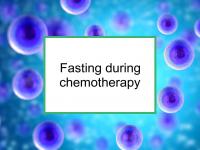 Fasting during chemotherapy
Fasting has been shown to protect normal cells from the toxic effects of chemotherapy and radiotherapy while sensitizing fast-growing cancer cells to treatment. Normal cells deprived of nutrients enter a dormant state which largely protects them, whereas cancer cells attempt to keep growing and dividing, exposing them to the cytotoxic effects of treatment.
While these findings appear to support fasting during chemotherapy, caution is advised. There are circumstances under which fasting actually promotes breast cancer development or growth. In addition, it is important to adhere to a safe and effective fasting regimen. Now a new phase II trial has reported that a specialized fasting diet significantly increased treatment response while reducing the toxicity of neoadjuvant chemotherapy (i.e., chemotherapy before surgery to remove the tumor).

Extended periods of starvation have been shown to increase subsequent breast cancer risk. For example, one study reported that women exposed to extreme hunger during World War II had five times the risk of subsequent breast cancer as similar women who were only mildly exposed to hunger.
Also, while women with a history of anorexia nervosa appear to have a lower risk of developing breast cancer than the general population, they have significantly worse survival. In fact, although obesity is associated with increased breast cancer risk and reduced survival, underweight women are less likely to survive breast cancer than normal weight or somewhat overweight women.
On a cellular level, fasting has the potential to heighten tumor defenses or adaptive responses under some circumstances. For example, one study reported that breast cancer cells growing under prolonged periods of serum starvation developed increased chemoresistance, increasing the proportion of breast cancer cells with stem cell-like properties.

The study referenced above describes a phase II trial designed to investigate the treatment effects of a short-term fasting regimen during neoadjuvant chemotherapy. To conduct the study, the authors divided 131 women with stage II or stage III HER2-negative breast cancer into two similar groups. None of the women had diabetes or were underweight (defined as BMI under 18 kg m2). The women were assigned either to a fasting mimicking diet (FMD) or to their regular diets for the three days before plus the day of chemotherapy (consisting of AC-T (doxorubicin, cyclophosphamide + docetaxel) or FEC-T (5-fluorouracil, epirubicin, cyclophosphamide + docetaxel)).
The FMD was a four-day plant-based diet, consisting of soups, broths, liquids and tea. The calorie content started at 1200 during day one, but was reduced to 200 during days two through four. The carbohydrate/protein/fat energy ratio was approximately 3.5/1/2 on day one. However, complex carbohydrates compromised over 80% of calories on days two through four.
The two groups of study participants experienced no differences in chemotherapy toxicity, despite the fact that the FMD group did not receive pretreatment with dexamethasone. Women in the FMD group were more than three times more likely to experience a radiologically complete response or partial response than the non-FMD group. In addition, women in the FMD group were four times as likely to experience 90 to 100% tumor cell loss, according to the Miller and Payne pathological response score. Finally, the FMD was found to significantly reduce chemotherapy-induced DNA damage in T-lymphocytes, an important part of the immune system. The authors conclude that these findings provide justification for further exploration of the benefits of fasting/FMD during cancer treatment.
Please see our article on fasting during chemotherapy for more information.