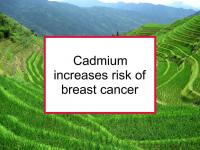 Cadmium increases risk of breast cancer
A study originally presented at the recent American Association for Cancer Research (AACR) Meeting has reported that exposure to cadmium is associated with increased breast density, a marker for breast cancer risk. Breast density is influenced by environmental and hormonal factors, as well as genetic propensity.
Cadmium, a persistent and widespread heavy metal pollutant, has been reported to increase risk of breast cancer in population studies. Cadmium has also been shown to act as a carcinogen of the breast in the laboratory. The level of cadmium in urine reflects exposure to cadmium over the previous 20 to 30 years.
The study included 190 premenopausal women aged 40 to 45, who were recruited from a breast cancer screening program of a large healthcare system. Percentage mammographic density and Breast Imaging-Reporting and Data Systems (BI-RADS) breast density category were determined from the screening mammograms of the participants. The strength of associations between urinary cadmium and mammographic breast density were calculated while adjusting for age, race, number of children, smoking history, and body mass index.
Average mammographic density among women in the highest third of urinary cadmium levels was 4.6% higher than among women in the lowest third. Each twofold increase in urinary cadmium was associated with a 75% higher likelihood of having “extremely dense” mammographic density, according to the BIRADS breast density rating system. The authors conclude that exposure to cadmium may be associated with increased breast density in premenopausal women.
Dietary sources of cadmium include shellfish, canned fish, rice, flaxseed, escargot, sunflower seeds, and dried apricots from certain geographic regions.