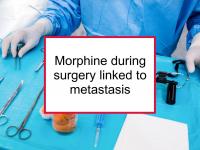 Surgery morphine linked to metastasis
Breast cancer surgery appears to trigger accelerated growth of any remaining tumor cells, both in the breast and in more distant locations in the body. Morphine can also increase proliferation and migration of breast cancer cells, as well as promoting angiogenesis. In addition, morphine suppresses the immune system.
Animal and human studies comparing surgery with and without morphine or other opiates have demonstrated that use of opiates can increase the likelihood of breast cancer recurrence. Use of the nonsteroidal anti-inflammatory drug (NSAID) Toradol (ketorolac) during surgery instead of morphine significantly reduced breast cancer recurrence in one study. However, a 2021 study found that while intraoperative Toradol reduced postoperative opioid use, it also increased the risk of bleeding requiring reoperation (4.8% with Toradol compared to 1.8% without).

Surgery itself can stimulate metastasis

Surgery is the primary and most effective treatment of breast cancer. However, the stress response induced by surgery impairs immune system functioning, promotes postoperative infections, and increases inflammation. Surgery appears to promote metastasis through its effects on both the remaining breast tissue and distant tumor cells that had already been disseminated to other parts of the body prior to surgery.
Generally speaking, changes at the site of the surgical wound have been reported to accelerate the growth of cancer cells and are suspected of increasing their metastatic potential. In other words, surgery that leaves some of the tumor cells behind might promote the proliferation and motility of these cells, thereby allowing their escape into circulation. While there may already be dormant cancer cells in distant sites (which might have been seeded years earlier) that could potentially develop into tumors, cancer cells made suddenly mobile as a result of surgery would result in new waves of micrometastases with at least equal probability of developing into new tumors.
Surgery has been shown to induce modifications in the expression of genes implicated in metastasis, leading to changes that accelerate metastatic tumor growth in remaining tumor cells. In one study, mice prone to lung metastases were implanted with mammary tumors that were allowed to grow for 21 days. The mice were then divided into two groups, one of which had their mammary tumors completely surgically removed. At the end of the study, the lung metastases of the two groups of mice were compared. Surgical tumor removal was associated with increased number and size of metastases. Further analysis demonstrated that primary tumor removal led to increased expression of genes involved in tumor cell adhesion, invasion, and angiogenesis. Another mouse study reported that surgical removal of mammary tumors generated patterns of metastatic dissemination significantly different from those observed in tumors not treated by surgery. Note that use of regional (e.g., spinal anesthesia) instead of general anesthesia has been reported to reduce the surgical stress response.

Morphine appears to amplify the deleterious effects of surgery. Morphine has been found to increase proliferation, inhibit the immune response, and promote angiogenesis of breast cancer cells in the laboratory. Comparisons of breast cancer surgery performed with or without morphine or other opiates have reported lower rates of breast cancer recurrence for surgery without opiates, although not studies are in agreement:

Common NSAIDs include aspirin, ibuprofen (Advil, Motrin), naproxen (Aleve), and Celebrex. Although study results concerning NSAIDs are inconsistent, previous studies have reported that aspirin and Celebrex both are associated with reduced breast cancer risk and recurrence, whereas Aleve might have less effect, and ibuprofen could actually increase risk. Over-the-counter NSAIDs should not be used before surgery because they increase risk of bleeding. Also, note that Celebrex has been shown to interfere with the effectiveness of Adriamycin (doxorubicin) and certain other chemotherapy drugs and should not be used during chemotherapy.

There is enough evidence concerning morphine to warrant considering restricting its use. Many breast surgeries could probably be performed without any use of opiates. Breast cancer patients can request that alternate methods of pain control be used during and after surgery, and themselves limit use of morphine and other opiates such as Vicodin, Oxycodone, and Percocet after surgery. Breast cancer patients might benefit from discussing this topic with their surgeons.
Below are links to recent studies on this topic. For a more complete list of studies, please click on anesthesiaMorphine.