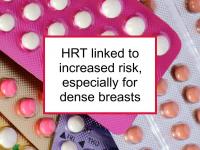 HRT linked to increased risk, especially for dense breasts
A new study has reported that postmenopausal women with high breast density are at increased risk of breast cancer, and that this risk is heightened when using hormone replacement therapy (HRT) or menopausal hormone therapy. The study was designed to determine whether the link between breast density, breast cancer risk and cancer aggressiveness is influenced by postmenopausal HRT use.
The study included 587,369 women who underwent 1,349,027 screening mammograms, of whom 14,090 were diagnosed with breast cancer. Five-year breast cancer risk was calculated, taking into account the women's breast density (as measured by the Breast Imaging Reporting and Data System (BIRADS)), menopausal status, age, and current HRT use.