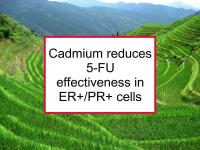 Cadmium reduces 5-FU effectiveness in ER+/PR+
Cadmium is a persistent and widespread heavy metal pollutant with no known health benefits. Since the body does not readily eliminate it, cadmium accumulates in tissues. The level of cadmium in urine reflects exposure to cadmium over the previous 20 to 30 years. High cadmium levels in breast tissue and urine have been linked to increased rates of breast cancer.
Cadmium is associated with increased breast density, a marker for breast cancer risk. Cadmium exposure has been linked to increased risk of breast cancer in several population studies. Numerous studies have demonstrated that cadmium promotes the growth and proliferation of breast cancer cells. Now a new study has reported that cadmium interferes with the treatment effects of 5-Fluorouracil (5-FU) chemotherapy in hormone receptor positive breast cancer cells.

Cadmium is easily absorbed through the lungs, less easily absorbed in the digestive tract, and difficult to absorb through the skin. Cadmium is released into the environment from numerous types of mining, metal smelting, manufacturing and waste disposal operations. People living near or working for such industries might be exposed to relatively high levels of cadmium in the air. Cadmium is also found in vehicle exhaust, leading to potentially high levels of cadmium in soils near roads. Cigarettes are also a possible source of significant cadmium exposure.

Diet is the primary source of cadmium exposure for most U.S. women. Both developed and less developed countries have problems with cadmium contamination of coastal waters, leading to potentially high levels in shellfish. In addition, there are large areas of some countries, including the U.S., Canada and China, in which significant levels of cadmium are found naturally in the soil. Certain plants take up and incorporate cadmium more readily than others. Included are rice and other cereal grains, flaxseed, potatoes, sunflowers, peanuts, spinach and other leafy vegetables, and tobacco. Generally speaking, cooking is not effective as a means of reducing cadmium concentrations in food.
Most U.S. women can limit their cadmium exposure by avoiding all but modest consumption of the following foods:Please see our article on cadmium for more detailed information concerning these foods. Unfortunately, very little information is available to U.S. consumers with respect to the cadmium content of food, whether domestic or imported. This can mean that they are worse off than consumers in areas with more cadmium regulations. For example, stricter European rules concerning cadmium in sunflower imports from the U.S. have caused sunflower seeds grown in U.S. soils with low levels of cadmium to be diverted to the European market, leaving less desirable sunflower seeds for U.S. consumers (who are unaware of the problem).
If one of the foods you enjoy is on the list above, make every attempt to find a low-cadmium source. For example, free range snails should be grown on a farm that is several miles away from any industrial plant or waste facility and away from any but the smallest, low-traffic roads. The point is to avoid inadvertent, ongoing consumption of cadmium in a favorite food or dish. Those growing their own vegetables should avoid using roadside plots.

The study referenced at the beginning of this news article was designed to investigate the influence of cadmium on treatment with 5-FU in hormone receptor positive (ER+/PR+) MCF-7 breast cancer cells. 5-FU is a fluoropyrimidine chemotherapy drug used to treat solid tumors of the colon, stomach, liver, and pancreas, as well as the breast. The authors performed various experiments to examine the effects of cadmium on cell cycle, apoptosis (programmed cell death), and gene and protein expression in MCF-7 cells treated with 5-FU. Cadmium was found to modify the cell cycle profile, significantly suppress apoptosis, and alter the expression of various genes and proteins associated with cancer in ways that blunted the treatment effects of 5-FU. The authors conclude that exposure to cadmium blocks the anticancer effects of 5-FU in MCF-7 cells.
Please see our article on cadmium and breast cancer for more information.