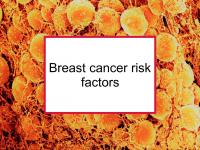 Breast cancer risk factors
A new study recently presented at the Annual AACR International Conference on Frontiers in Cancer Prevention Research in New Orleans has ranked well-established breast cancer risk factors for postmenopausal breast cancer. The authors divided the factors into those over which women have little or no control, such as height, and those that are modifiable, such as alcohol consumption.
The authors estimate that, generally speaking, women who avoid the most important modifiable risk factors could potentially reduce their risk of postmenopausal breast cancer by almost 40%.

To conduct the study, the authors used data from the Nurses' Health Study (NHS), an ongoing prospective study of 121,700 U.S. nurses that began in 1976. A total of 8,421 postmenopausal study participants developed invasive breast cancer during the investigation period (1980 to 2008). The authors analyzed data concerning two types of risk factors—those that are unmodifiable or difficult to modify (especially in middle age) and those that can be changed.