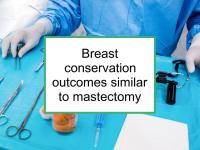 Breast conserving treatment is most appropriate for women with small, single early stage tumors that are easy to visualize with mammography or breast MRI. Small tumors are more easy to remove completely than large tumors. Perhaps counterintuitively, the aggressiveness of the disease is not the next most important factor in deciding whether lumpectomy is appropriate. For example, triple negative tumors, which are considered aggressive, typically form discrete tumors that are relatively easy to visualize radiologically.
Therefore, surgeons can be fairly confident of removing all of the tumor during surgery and obtaining clean surgical margins. However, patients with disease (such as lobular or inflammatory breast cancer) that tends to be diffuse, multifocal or difficult to detect have higher rates of mastectomy because initial breast conserving surgery is less likely to result in clean surgical margins.

Radiation treatment is an essential part of breast conserving treatment

Women who undergo lumpectomy or partial mastectomy should have radiation treatment as part of their treatment to kill any remaining tumor cells in the breast area. There is ample evidence that radiation significantly reduces the risk of locoregional recurrence, which in turn reduces the risk of distant metastasis. Some women are deciding not to have radiation treatment after lumpectomy - this is an unwise choice, based on available evidence.