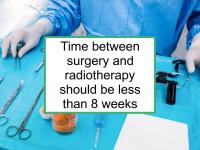 Time between surgery and radiotherapy should be less than 8 weeks
Undue delays between breast cancer treatment phases are associated with less favorable outcomes. Women with more aggressive types of breast cancer (e.g., triple negative (ER-/PR-/HER2-) or inflammatory breast cancer (IBC)) are more vulnerable to the potentially harmful effects of treatment delays. It appears to be particularly important to start the next phase of treatment within 60 to 90 days of breast cancer surgery since surgery itself can cause changes favorable to metastasis.
Now a new study has reported that for those undergoing neoadjuvant chemotherapy (chemotherapy designed to shrink a breast tumor before surgery), eight weeks (56 days) or less between surgery and the start of radiotherapy appears preferable to longer time periods.

Tumors of newly diagnosed women often have been growing for years before being detected. In cases of very indolent disease, some very small tumors could potentially remain untreated for extended periods of time without materially affecting prognosis. However, treatment appears to "wake up" breast cancer. Any cancer cells that escape the toxic effects of neoadjuvant chemotherapy are more likely to have developed stem cell-like properties, including the ability to divide indefinitely.
In addition, surgery itself appears to increase the metastatic potential of any remaining cancer cells. Surgery has been shown to induce modifications in the expression of genes implicated in metastasis, leading to changes that accelerate metastatic growth in remaining tumor cells. For example, surgery appears to promote the proliferation and motility (ability to move) of tumor cells left behind, thereby allowing their escape into circulation. Therefore, it is important that radiotherapy designed to kill any remaining tumor cells in the breast occur in a timely manner.

The study referenced above was designed to investigate the survival impact of delays in beginning radiation treatment after neoadjuvant chemotherapy and surgery. Radiotherapy is normally recommended for breast cancer patients after such chemotherapy and surgery but the optimal time to initiation has not been established. To conduct the study, the authors analyzed data concerning 581 patients who underwent radiotherapy after neoadjuvant chemotherapy and surgery at their institution (Instituto do Cancer do Estado de São Paulo) between 2008 and 2014. A total of 430 (74%) of the women had stage III breast cancer. The women were followed for a median of 32 months.
Study participants were placed into three groups depending on the length of time between surgery and first radiation treatment: < 8 weeks (43 patients), 8-16 weeks (354), or > 16 weeks (184). Women who started radiotherapy within eight weeks of surgery were found to have far superior breast cancer-free survival than women with longer times to radiation treatment. Women in the < 8 week group also experienced markedly superior overall survival. The authors conclude that early initiation of post-operative radiotherapy may be critically important for patients after neoadjuvant chemotherapy and surgery. However, a low numbers of patients and breast cancer events in the study prevent the authors from drawing firm conclusions.